Ireland centre Chris Farrell looks set to miss the remaining two matches of this year's NatWest Six Nations due to an injury picked up in training.

Joe Schmidt's side were taking part in an open training session at the Aviva Stadium earlier on Tuesday when Farrell twisted his knee and required medical attention.

Farrell, who picked up the man of the match award for an outstanding performance in Saturday's win against Wales, re-joined the group with no initial effects, however, a precautionary scan has revealed ligament damage.

The IRFU have released a statement in relation to the incident, confirming that Farrell is "unlikely to be available" for the upcoming matches with Scotland and England. 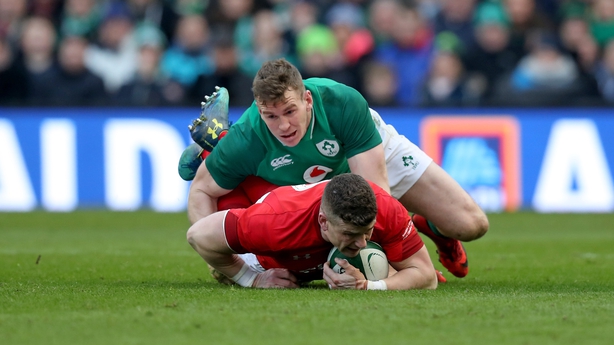 Ireland head coach Schmidt laughed off the injury in the post-training press conference, assuming, no doubt, that Farrell was fully fit.

"He jogged back out to the huddle, he was described as Lazarus by the players," said Schmidt.

"He just got his foot caught and twisted and fell and then got a bit of a fright. He certainly was jogging around.

"I’ve just come from chatting to him and he says he is absolutely fine. We don’t suspect that there’s any issue there."

The subsequent IRFU statement read: "Chris Farrell received treatment on the field earlier today after twisting his knee in the turf.

"He subsequently jogged on to re-join the rest of the playing group and felt well.

"He was sent for a precautionary scan this afternoon which indicated some ligament damage had occurred and he will now see a specialist.

"Chris is unlikely to be available for the remainder of the 6 Nations."