Ireland claimed their second win of the Women’s Six Nations campaign with a five-try showing against Wales in Donnybrook.

After a discouraging defeat to France at the start of February, Adam Griggs’ side bounced back with a victory over Italy and backed that up with a high-octane win over Wales, which included some scintillating passages of play in the freezing Dublin air.

The hosts led 14-0 at the break thanks to tries from prop Leah Lyons and wing forward Claire Molloy, who won player of the match.

However, Wales fought back to within two points with early second-half scores from Amy Evans and Sioned Harries.

Lindsay Peat was then sin-binned but the visitors couldn’t take advantage of their numerical advantage and it was Ireland who added to their tally, Sene Naoupu combining with Niamh Briggs, who kicked three conversions, for an excellent score.

Down to 14,  Ireland get their third try of the day #rterugby pic.twitter.com/uVNO6pVUh4

As Wales pushed to get back into the contest, replacement Hannah Tyrrell found space to go over for the bonus-point try before Molloy grabbed her second to put the icing on the cake, Kim Flood adding the extras on both occasions.

"There are still patches where we can be sharper," Griggs told RTÉ Sport after the game.

"We’ve seen that in training and today we’ve put those moves on the field.

"We are starting to build some depth, it’s promising for us, rolling on to Scotland we’re in a good place."

The result sees Ireland remain in third place in the table with games against Scotland and England to come. 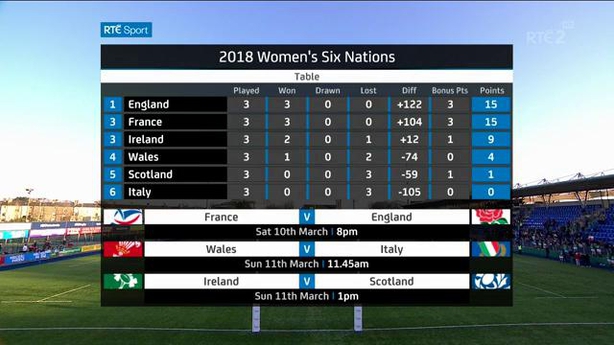