Ian Keatley came off the bench to steer Munster to a 33-5 Guinness PRO14 bonus-point win over Michael Bradley's Zebre at Thomond Park on a night when controversial signing Gerbrandt Grobler made his debut.

Keatley missed out on the reserve fly-half spot for the opening two rounds of Ireland's NatWest 6 Nations campaign, but his impressive cameo in Limerick will no doubt have been noted by national coach Joe Schmidt.

Munster, who had first-half tries from Sam Arnold and Brian Scott, were finding it tough going when Guglielmo Palazzani marked his 100th appearance for Zebre with a snappy 52nd-minute try, cutting the gap to 12-5.

However, the hosts were able to bring on the Ireland trio of Keatley, Rory Scannell and John Ryan, as well as South African debutant Grobler, and unanswered scores from man of the match Robin Copeland (55), Scannell (57) and Arnold (73) wrapped up the points.

Grobler has been a contentious signing for the province. Both Munster and the IRFU had to defend their decision to employ the 26-year-old, who admitted to and served a two-year ban for doping with the anabolic steroid Drostanolone in South Africa in 2015.

A recent joint statement from the province and the sport’s governing body argued that he deserved a second chance, saying that "While some hold the view that rugby should provide no road-back for those that have taken a banned substance in the past, it would not be within the spirit and values of rugby to turn its back on every person that ever made a bad decision, having made restitution." 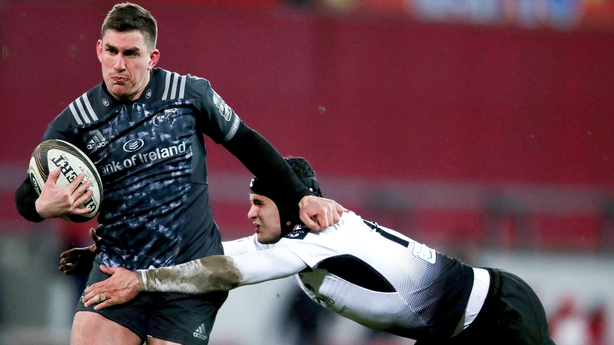 Munster finished with a flourish, Arnold completing his brace after sharp handling by lively 21-year-old scrum-half John Poland and Scannell, and it would have been even more emphatic had Simon Zebo's kick not beaten him over the end-line

With a strong wind behind them in the first half, Zebre engineered the first scoring opportunity but number eight Copeland's excellent maul defence forced a turnover.

Darren Sweetnam was prominent in attack for Munster, who had to wait until the 25th minute for the breakthrough score. Duncan Williams and JJ Hanrahan whipped possession wide for Conor Oliver to send bustling centre Arnold over in the left corner.

Hanrahan missed the conversion but it was his soft hands which launched Munster downfield for try number two. Zebre coughed up a penalty and the resulting lineout maul saw prop Scott plunge over with support from Copeland.

Hanrahan's successful kick from out wide made it 12-0 at the interval, with the Italian side missing out on a late reply when Renato Giammarioli's forward pass ruled out a try for Faialaga Afamasaga.

Scrum-half Williams, who was making his 150th appearance for Munster, did not cover himself in glory when he was blocked down early in the second half, and he then afforded his opposite number Palazzani too much space as the Italy international struck for his five-pointer from a close-range scrum.

However, that concession brought the best out of Johann van Graan's side as Keatley made an impact as a replacement. The industrious Oliver was stopped just short of the line before Copeland successfully grounded the ball for 19-5.