Two first-half tries by winger Jonny May were enough for holders England to beat a gutsy Wales side 12-6 in an intense Six Nations match at Twickenham.

On a freezing wet day in west London, May took advantage of two moments of magic to race over as England claimed a 15th successive home victory in the competition to keep them top of the standings.

England led 12-3 at the interval and although Wales threw everything at them in the second half, Eddie Jones's side produced a resolute rearguard action and clung on to take the points.

Controversy clouded the result, however, after television match official Glenn Newman ruled out a try for  Anscombe when Wales trailed 12-0 in the second quarter.

Anscombe appeared to exert downward pressure with an outstretched hand at the end of an attack down the left wing, but Newman thought otherwise and a key moment had fallen in England's favour.

The decision proved critical as a late penalty by Anscombe reduced their lead to six points.

It took a try-saving tackle from Sam Underhill to again deny Wales in a second half dominated by the visitors, who were missing seven Test British and Irish Lions including Leigh Halfpenny, a casualty before kick due to an unspecified injury.

Eddie Jones ignited the build when asking if Rhys Patchell had the "bottle" for the occasion and whether the mind games affected Wales' fly-half only he will know, but he endured a disappointing afternoon.

At one point in the second half the ball squirted unexpectedly out of his hands as he staged a counter-attack, summing up his afternoon, and he was replaced shortly after.

Opposite him George Ford, brilliantly assisted by Owen Farrell, excelled through his kicking, but it was the two defences that emerged with enhanced reputations after refusing to buckle. 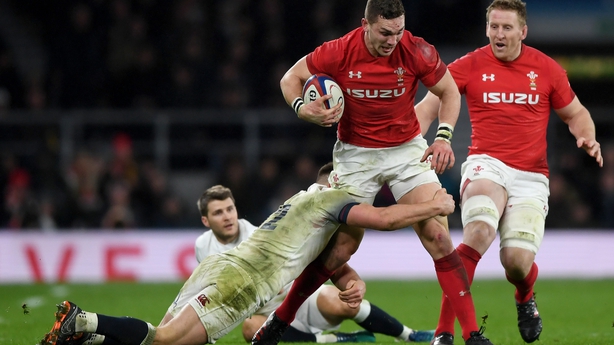 Dylan Hartley departed for a head injury assessment after only 42 seconds but his exit failed to knock England off their stride as they surged ahead through a try founded on the vision of Farrell.

Anthony Watson challenged Patchell for a hanging kick and a slippery ball squirted out to Farrell who, spotting space on the left, delivered a perfectly-weighted kick for May to outrun three onrushing defenders and touch down.

Wales were met by a wall of white shirts as they sought to make an impression and it was Maro Itoje who forced a turnover with a thumping tackle, the prelude to the hosts' next try.

Waves of runners made ground and with the defence finally splitting the ball was sent left where Joe Launchbury burrowed forward before feeding an opportunistic May the scoring pass.

A Patchell penalty nudged the visitors off the mark after Anscombe's try had been disallowed and they entered a key phase as they attacked from a line-out, hammering away with success until a knock-on undid all their good work.

Like two boxers slugging it out, the rivals continued to exchange blows and it took the arrival of Jack Nowell from the bench - he had replaced the injured Anthony Watson - to get England moving forward again.

As play entered the third quarter a breathless series of turnovers unfolded and it took a try-saving tackle by Underhill on Scott Williams to keep Wales out.

Wales chucked everything at England in the closing stages, Anscombe's penalty adding to the tension, but the home defence held out.