Ireland claimed a routine but disjointed win over a ragged Italy outfit in their second NatWest Six Nations game but the victory came at a cost as two front-line players suffered injuries.

Last weekend’s famous win over France came down to the last kick of the game but this game was over as a contest after first-half tries from Robbie Henshaw, Conor Murray, Bundee Aki and Keith Earls.

The game also saw a debut for Jordan Larmour, the Leinster star replacing Henshaw, injured in the act of scoring his second try, early in the second half.

The hosts added further tries after the break from captain Rory Best and Jacob Stockdale (2).

Ireland had already lost prop Tadhg Furlong after just three minutes, the Lions tighthead was replaced by Andrew Porter after injuring his hamstring.

The replacement got straight in on the action and carried for 10 metres as Ireland took a firm grip on proceedings.

It took Joe Schmidt’s men just 11 minutes to break through the Italian defence, poor all afternoon, Henshaw coming short for a pop ball from man-of-the-match Murray to barge over.

The scrum-half then combined with Jack Conan on the tramlines to race clear from the 22 to put Ireland in a healthy position.

Aki, winning his fourth cap, then got his first international try when he barged in from short range off another Murray pop pass.

Johnny Sexton landed all three kicks as Ireland raced into a 21-0 lead after 23 minutes.

Italy were hapless in defence and only for a series of knock-ons, too many for Schmidt’s liking, would have been further ahead.

However, it didn’t take long for Earls to get on the score sheet, the right winger scorching over in the corner after Dan Leavy won a turnover and Aki fooled his marker with a clever step.

Again, Sexton found the distance from the right-hand touchline.

Italy barely made any impression on the ball and it was the 39th minute before they forced a penalty, Stockdale holding on to the ball on the ground.

Even then, Conor O’Shea’s side couldn’t secure the lineout and Ireland went in four converted tries to the good after dominating possession (68%) and territory (72%).

"There’s been a lack of accuracy in the 22," said Paddy Wallace on analyst duty with RTÉ Radio 1’s Saturday Sport, after a number of handling errors and poor execution from the hosts. "Joe will be reading the riot act."

Whatever happened in the dressing room, Schmidt made two changes at the break with Quinn Roux and CJ Stander replacing Iain Henderson and Jack Conan.

Roux had been added to the squad in the absence of Ultan Dillane, whose mother passed away during the week, the Irish players wearing black armbands as a mark of respect.

Henshaw added his second four minutes into the second half, intercepting a loop pass from Italy captain Sergio Parisse to run in from the 22. 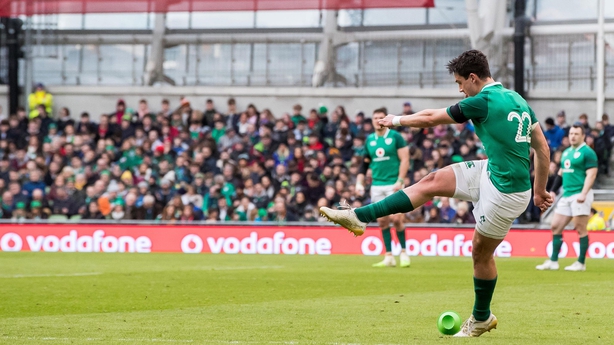 However, it was to be his last action, the ex-Connacht centre hurting his shoulder as he touched down, and that led to a debut for Larmour, the 20-year-old featuring in his first Six Nations squad.

Schmidt sent on Joey Carbery, who had played just 22 minutes of competitive action since breaking his arm against Fiji last November, and Kieran Marmion for Sexton and Murray and Ireland soon added two more tries without any discernible resistance from the Azzurri.

Ulster duo Best and Stockdale touched down either side of a converted Tommaso Allan effort that took the bare look off the scoreboard for the visitors.

But Italy were allowed to add another consolation try when Parisse fired a poor pass inside that was picked up by replacement Edoardo Gori, who seemed to have all the time in the world to dive over.

"Schmidt will be raging with that," said Donal Lenihan on RTÉ Radio 1, as the Ireland defence was marked missing in action. 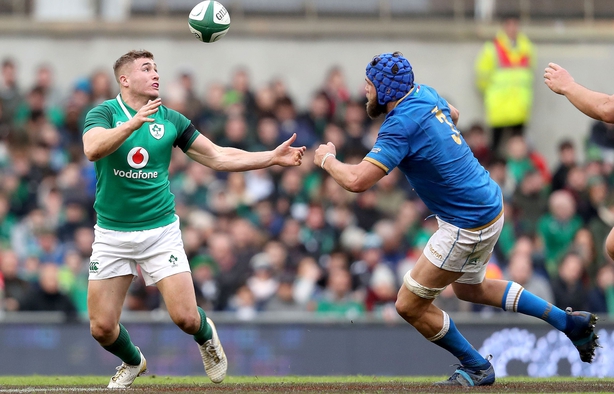 Stockdale then picked up another interception try and outpaced his man, with Earls running in support, to finish from the halfway mark. It was the winger’s sixth try in six international appearances.

Ireland needed to be ruthless but they let Italy in for another score, full-back Matteo Minozzi diving over in the corner.

There was still time for a brief cameo for Larmour, who was pulled down by the last defender as the tryline beckoned.

Schmidt has plenty to work on ahead of the home clash with Wales in two weeks’ time as he tries to figure out why Ireland failed to play to their potential.