Italy coach Conor O'Shea has admitted he had to stop himself from picking Ian McKinley to face Ireland purely to create a "romantic story".

Dublin-born fly-half McKinley was forced to retire in 2011 after being blinded in one eye, only to relaunch his career in Italy three years later thanks to the aid of specially-designed protective goggles.

The former Leinster playmaker's situation even led World Rugby to ratify the use of the goggles for Test rugby, with the 28-year-old since progressing to represent Italy by way of residency.

Former Ireland full-back O'Shea conceded he would have loved to throw in McKinley to face his Irish compatriots in Saturday's NatWest 6 Nations clash in Dublin on Saturday - but felt compelled to keep faith with Tommaso Allan and Carlo Canna.

"He was disappointed because he wants to play, that's the bottom line," O'Shea told reporters of Benetton playmaker McKinley.

"I knew it would mean a lot to him, so I said as much. 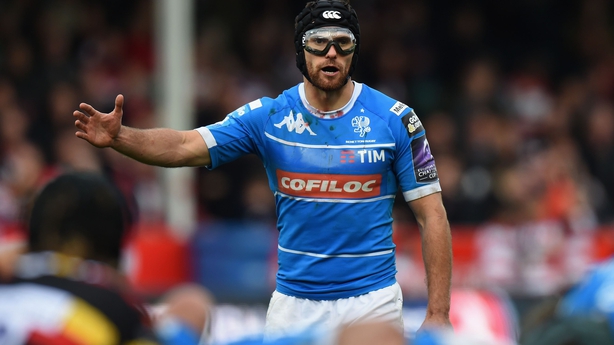 "But Ian's a rugby player, he's not a romantic story. Ian wants to be picked because he is the number one rugby player and has the right to be in this team at the time, not because he's a story.

"Sport is full of romance but the hard-nosed side of it is that, at the moment, Tommy Allan had the jersey last weekend and was outstanding, and Carlo Canna is one of the top points-scorers in Pro14 rugby and an exciting talent who brings a different skill-set.

"I'd love to have picked Ian, I wanted to pick him in so many ways but how could you say to the other players, 'you're not picked because I want to pick Ian on romance'. Ian is a rugby player and he's a bloody good rugby player."

After the defeat to England, O'Shea has made three changes, with Braam Steyn at openside, Luca Bigi at hooker and Nicola Quaglio at loosehead prop, all starting at the Aviva.