Ireland’s dreadful record in Paris looked set to continue as they trailed 13-12 past the 80 minute mark.

As firm as 5/2 on favourites before kick-off, Joe Schmidt’s side led for most of the clash without ever killing off a French team that had not won in seven previous games.

It was coach Jacques Brunel’s first game in charge and he drew an inexperienced team together that stuck with Ireland, who were ahead thanks to four Sexton penalties, until winger Teddy Thomas scorched home from 50 yards, his converted try putting the French ahead for the first time in the game with seven minutes to play

Anthony Belleau missed a chance to extend the lead and Ireland had to make their way into France territory with time running out to land the winning score.

It took 41 phases before Sexton decided that he was in range, the out-half's arms going up in celebration before the ball dropped inches over the bar and Ireland escaped with just their third win in the city since the early 70s.

Until Murray’s overcooked Garryowen in the eighth minute, every play went according to plan and it yielded a penalty for Sexton after France went offside in the centre. 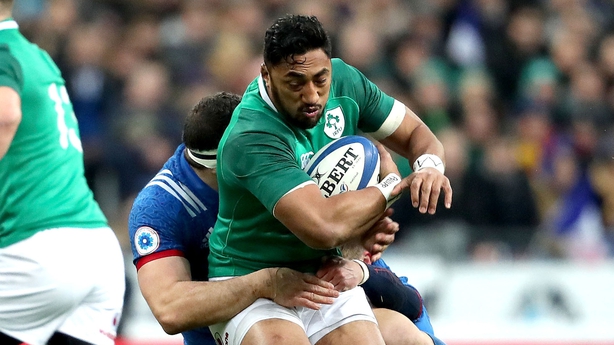 Les Bleus however were still not as sharp as Ireland and lost possession through some basic errors, an infection that soon spread to the visitors.

Matthieu Jalibert, the 19-year-old out-half debutant, almost set Virimi Vakatawa away but the pair ran out of space on the left flank, however, France were gaining a foothold in the tie through Irish errors.

Ireland were struggling in the tight spaces in midfield but when Keith Earls got the ball out wide and ran at the French defence it again ended with another Sexton penalty in the 23rd minute. 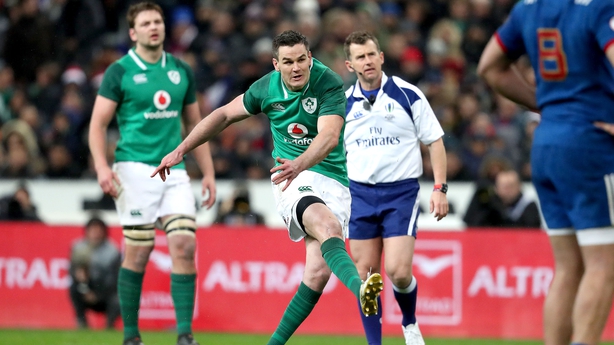 They couldn’t build on the momentum and were guilty of trying too hard; Rob Kearney had to be alert when a kick-through threatened to get France on the scoreboard.

The error count was increasing and just when it looked like some room would open up for the busy Earls or James Ryan the support play was too slow.

France lost Jalibert to a knee injury after half an hour and on came another rookie, the twice capped Belleau.

True, Ireland had a slight advantage in the possession and territory stakes but still their collective play looked nervy and when CJ Stander and Kearney were stripped of the ball it led to Maxime Machenaud halving the deficit with a penalty five minutes before the break.

Dan Leavy replaced stricken Josh van der Flier, the flanker going off for what appeared to be a knee injury,  but Ireland hit back four minutes later with a crucial score.

The attack was lateral and making slow progress up the pitch; France seemed comfortable in defence but Sebastien Vahaamahina decided to charge into Murray at a slow ruck and Sexton pushed out the lead to six again with the resulting penalty. 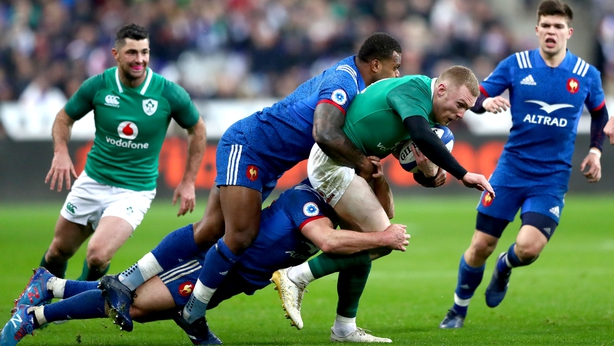 The half-time stats showed that Schmidt’s men had enjoyed 70% possession and 72% territory so the 9-3 lead was the least they should have expected but the coach would have been glad of the break to discuss the sloppiness of their play.

The second half started in the same vein and Ireland kept the scoreboard ticking over another Sexton penalty.

The vistors pushed for another score and were within 10 metres of the line when Tadhg Furlong was stripped by Jefferson Poirot, the turnover eventually leading to Machenaud slotting France’s second penalty.

France, buoyed by the strains of La Marseillaise, tried to push back as the rain continued to fall steadily in Saint Denis.

Sexton missed a kickable penalty, Henshaw threw a forward pass in midfield and France made a 50-yard break when wing Virimi Vakatawa cut inside.

The Leinster and Lions out-half then forced a brilliant turnover, which earned him his team-mates’ plaudits but Ireland were playing like a computer with a glitch somewhere in the system.

Then came the score that looked to have stolen the game from Ireland.

Kearney cleared to touch near the halfway mark, but a quick lineout throw was shovelled on to Thomas who cut inside and arrowed towards the posts with the full-back and Earls failing to lay a significant hand on the Racing 92 winger.

Belleau duly converted to give France the lead in the 72nd minute.

The replacement out-half's missed penalty then handed Ireland one last chance to wrestle back the lead.

Iain Henderson caught the restart, almost every green player then helped Ireland inch up field, Sexton even risked a cross-kick for Earls who did brilliantly to keep the play alive.

France thought they had repelled the attack but Sexton kept his cool and landed the monster kick before being smothered by his team-mates as Les Bleus lay strewn across the pitch, stunned by a moment of genius from the Ireland talisman. 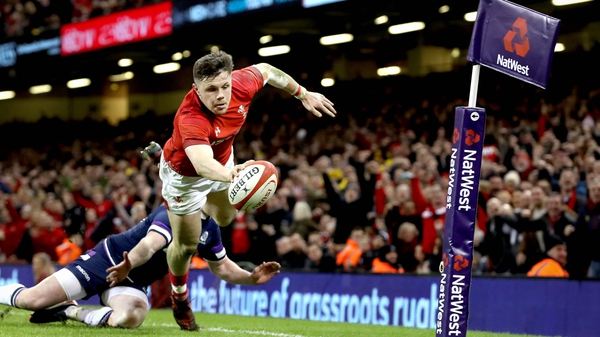 Wales show no weakness as they hammer Scotland