A brace of second-half tries from outstanding full-back Dave Fanagan helped St. Mary's College claim a much-needed 18-16 win over defending champions Cork Constitution in Division 1A of the Ulster Bank League this afternoon.

Second-placed Constitution were course to win this physically gruelling encounter when leading 16-6 on the hour mark. However, Mary's and Fanagan had other ideas and their late rally saw them come out on top to avenge November's narrow defeat on Leeside when they were denied by Tomas Quinlan's last-minute penalty.

In the rematch at Templeville Road, Peter Burke's Mary's side broke the deadlock in the 10th minute thanks to out-half Sean Kearns' beautifully-struck 40-metre penalty. Con turned down a kickable shot but after their lineout maul failed to produce a try, the hosts doubled their lead with a second penalty from Kearns.

Nonetheless, Con's challenge came to life in the second quarter as forward pressure and a series of powerful drives gave them significant attacking momentum. The industrious Aidan Moynihan knocked over a penalty from in front of the posts, and the visitors' persistence paid off as they created space on the left wing for Rob Jermyn to sprint over for an unconverted try.

Mary's turned around for the second half with an 8-6 deficit and facing into a stiff breeze. They fell further behind courtesy of a routine penalty from Moynihan. Heading towards the final quarter, some brilliant interplay between Moynihan and replacement Michael Clune put full-back Joe White over for Con's second try out wide.

Crucially, Moynihan was unable to convert and this missed kick had a bigger bearing on the outcome than anyone could have anticipated. Suddenly, with 15 minutes remaining, man-of-the-match Fanagan powered over the line after breaking through a Con tackle, offering his side a new lease of life in the process.

The pacy full-back repeated the trick at the end of a prolonged move just five minutes later, and replacement Conor Dean, who is part of Noel McNamara's Ireland Under-20 Six Nations squad, stepped up to convert and sensationally fire Mary's back in front.

Con were now desperately searching for a response, but thanks to a superb defensive effort in a nerve-wracking climax, the Dubliners held on for a result which moves them out of the bottom two. The Corkmen remain second in the table as two of their top-four rivals, Clontarf and Terenure College, also lost today. 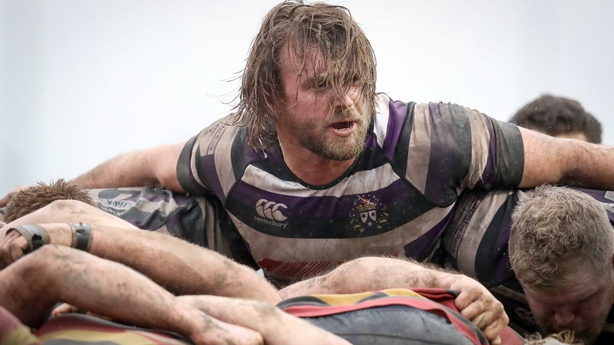 With the three teams directly below them all suffering defeats, unbeaten Lansdowne grasped the opportunity to enhance their standing at the top of Division 1A following a bruising 12-8 victory away to third-placed Terenure College.

Mike Ruddock's men are now 16 points clear at the summit and will have home advantage in the league semi-finals - barring a big collapse in the final third of the regular season. They chalked up win number 12 at Lakelands Park as influential forwards Josh O'Rourke and Aaron Conneely touched down late on in either half.

However, it was undoubtedly their toughest game of the campaign as Terenure pushed them all the way and did their utmost to end Lansdowne's proud winning record. Hooker and captain Robbie Smyth was driven over the line from a muscular 21st-minute maul to shoot James Blaney's side in front. Out-half Mark O'Neill was unable to add the conversion in windy conditions.

With the back-lines cancelling each other out, it was a day for the forwards to duke it out. Lock O'Rourke found enough space to crash over five minutes before the break, with Scott Deasy's successful conversion giving Lansdowne a 7-5 buffer. But they were quickly back on the defensive during scrum half Alan Bennie's sin-bin period.

A well-struck penalty from O'Neill nudged 'Nure ahead at 8-7 and the scoreboard remained untouched until Lansdowne clinically turned another unrelenting bout of forward pressure into points with 68 minutes on the clock. It has been a hallmark of their season to date and so often the platform for key scores in tight games.

Blindside Conneely made the breakthrough to give his side a hard-earned four-point lead. Roared on by the sizable home crowd, it was all hands to the pump as 'Nure hunted for a late match-winning try, and although this absorbing game went right down to the wire, leaders Lansdowne dug deep in defence to take home the spoils.

Clontarf's disappointing start to 2018 continued today when they went down 25-16 to a fired-up Young Munster side who triumphed on Castle Avenue's 4G pitch to gain some revenge for last year's semi-final defeat at the same venue.

Munsters outscored 'Tarf by three tries to one with Gavin Coombes, Dan Goggin, who made a welcome return to league action after a knee injury, and captain Alan Kennedy all touching down for Gearoid Prendergast's charges who have climbed back into the top half of the Division 1A table.

They put crucial distance between themselves and the north Dubliners by moving 18-6 clear for half-time. Clontarf led twice early on thanks to a brace of penalties from David Joyce who returned from injury for the hosts. Coombes' early effort was supplemented by a 13-point scoring blitz in the lead up to the interval, as full-back Alan Tynan converted centre Goggin's well-taken try and booted two penalties of his own.

Having suffered a 30-point defeat to leaders Lansdowne last time out, Clontarf were staring at another frustrating result against one of their top-four rivals. They had the better of the third quarter, though, as young winger James McKeown raced over for a converted try and and a subsequent Joyce penalty made it a two-point game again.

Just when it seemed that the momentum was behind Andy Wood's men, Munsters built for a decisive finish. Their ability to retain possession through multiple phases eventually wore the home defence down for second row Kennedy to reach over and Tynan's conversion took the losing bonus point away from 'Tarf, bringing to an end a pulsating performance which suggests that the Cookies can make the semi-finals for the fourth successive year.

Nice to be able to recognise what Hen, Fletch and BC have contributed to the club over all these years?? #Centurions pic.twitter.com/22HRNLNDUv

UCD staved off a late revival from bottom side Buccaneers to end their four-match losing streak with a 17-14 success at the Belfield Bowl.

Winless since beating Buccs 19-13 in Athlone back in November, the students were without a number of their Ireland Under-20 and Sevens internationals for the return fixture. However, they got to a strong start and were on course to return to winning ways when leading 12-0 at half-time.

The deadlock was broken on the quarter hour mark when flanker Alex Penny crossed in the corner, with Ciaran Frawley's touchline conversion going over off the post. There were 28 minutes on the clock when hooker Sean McNulty added try number two from a lineout maul, five metres out.

Buccaneers had a couple of serious attacking spells, deep in UCD territory, but emerged scoreless with their maul losing momentum, a couple of knock-ons thwarting them, and UCD also defending manfully from a close-lineout on the stroke of half-time.

When play resumed, the students were quick to register their third try of the contest. A well-executed maul made 20 metres, scrum half Patrick Patterson then sprung forward through a gap and replacement Brian Cawley was up in support to finish off the score. It was a memorable day for Cawley as both he and team-mates Emmet McMahon and Stephen Fletcher were presented with medals to mark them reaching the 100-cap milestone in College colours.

Buccaneers bounced back with a deserved try midway through the second half, having kicked two penalties to the corner and UCD losing a man to the sin-bin.

Centre Ben Carty was the player to touch down and convert, cutting the gap to 10 points. One more try might have killed off the Pirates' challenge, but UCD were unable to profit from their scrum which won a number of penalties.

Instead, Buccs had the hosts under intense pressure late on courtesy of a try under the posts from their skipper Shane Layden. Crucially, the students' strong chase of the restart forced a knock-on, and although another spill denied them a likely fourth try, Andy Skehan's young side stood firm to pocket a valuable four points.

The final of the prestigious national competition was played in wet conditions at Portlaoise RFC where Ashbourne, the current Leinster Junior League Division 1A leaders, used their greater experience and tactical nous to become two-in-a-row champions - matching a feat only achieved by Tullamore (2012-2013) before.

Tipperary challengers Kilfeacle were bidding to become the first Munster winners of the cup since Crosshaven in 2011, and with a strong wind behind them, they got off to an encouraging start with out-half Jamie Heuston nailing a 10th minute penalty from straight in front of the posts. Kevin Kinnane and Cormac O'Donoghue both impressed in the underdogs' back row.

It was a very physical contest with little given away in defence. Wind-backed Kilfeacle needed to put more scores on the board given the conditions, but Ashbourne stung them with an unconverted try on the stroke of half-time. Full-back Stephen O'Neill scored in the corner with Donal Crotty, Mark Rooney and Casey Dunne all involved in the build-up.

Out-half Crotty went on to be Ashbourne's match winner with a talismanic second half performance. He knocked over two penalties, sandwiching a second effort from Heuston soon after the resumption. That gave the Meath men an 11-6 lead to take into the final quarter, as the rain began to teem down. An excellent 64th-minute strike from Heuston - into the elements - set up a grandstand finish, though, at 11-9.

Nonetheless, the title holders struck decisively for a try six minutes later. Big back rower Simon Deevy was held up a few metres out before Ashbourne retained possession in impressive fashion and swung it out for Crotty to cross the whitewash and then add the extras himself. At the ripe old age of 47, Jeff Mahon came on for Ashbourne and despite his sin-binning in the dying minutes, O'Donnell's charges kept a gallant Kilfeacle out to confirm a double-scores victory.