For the first time since Joe Schmidt left the RDS for the biggest job in Irish rugby, the province's fans can legitimately dream about European glory.

The three-time Heineken Cup champions have, like all their Celtic cousins, struggled in a Champions Cup era dominated by Toulon and Saracens. A home quarter-final secured with a game to spare would suggest that Leo Cullen has built a side capable of lifting a first title since he hoisted the European Cup above his head in Twickenham in 2012.

With the help of senior coach Stuart Lancaster, Cullen has developed a team populated by academy graduates, backboned by stalwarts who battled alongside Cullen and garnished with some exceptional imports.

Man of the match Luke McGrath falls into the first category, Jonathan Sexton the second and Scott Fardy the last - this trio were central to Leinster's eight-try 55-19 demolition of a depleted Glasgow side.

Fardy bagged a brace of tries in a powerful performance for the second-row as part of dominant pack that overcame some early scrum pressure from the Scottish side to set a perfect platform for their backs.

Sexton was his typical influential self in a try-scoring display, but was overshadowed by his half-back partner - McGrath fast developing into the finest Irish scrum-half that is not named Conor Murray.

McGrath coordinated everything as Leinster took just 34 minutes to register their bonus point - Sean Cronin, Fardy and Sexton all touched down in a dazzling seven-minute spell before half-time, adding to earlier scores from Jordi Murphy and Leinster captain Isa Nacewa.

Leinster led 34-7 at half-time, as Nacewa and Fardy completed their braces and James Lowe scored on his European debut as the Irish province finished with eight tries in all. Having guaranteed top spot in the pool, they close out the group stages away to Montpellier next Saturday.

Much was made of the selection of Jordan Larmour and Lowe in the back three alongside another 2012 veteran, Fergus McFadden.

Larmour at full-back was unlucky to slip at the pivotal moment for Glasgow's second try from Adam Ashe, but overall showed up well in a solid performance that was lacking some of the razzle-dazzle of recent showings.

Solidity is always an attractive quality at the RDS and Cullen will be delighted to see a young man gaining rapid fame for his attacking displays turn in a performance such as this.

Lowe is another man wowing since his move to Dublin from New Zealand and, while pivotal in a number of their tries, Glasgow's final try showed that the flamboyant Kiwi is willing to take risks at both ends of the field. 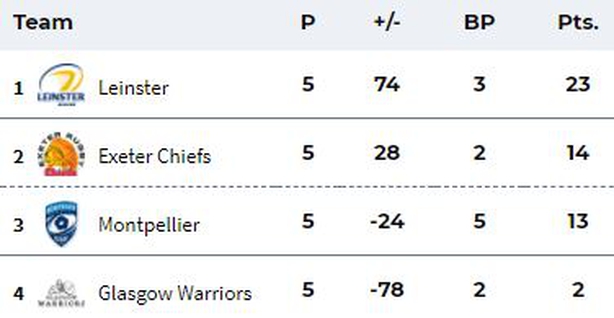 It was Lowe who erred when shooting out of defence and allowed Nikola Matawalu enough space to dive over in the right corner. As long as the tries flow for Leinster such moments can be accepted, but Cullen will look to eradicate such moments in next week's dead rubber in Montpellier with the knockout stages in mind.

Warriors played with plenty of spark early on, with Lee Jones threatening out wide and Nick Grigg also prominent. But Leinster's first visit to the 22 resulted in a seventh-minute try, Luke McGrath's beautifully pulled-back pass sending Jordi Murphy in under the posts.

Glasgow then capitalised on flanker Murphy's sin-binning for not being back 10 metres as Ali Price threatened to score from a tap penalty. That try arrived in the 16th minute, Matawalu's sidestepping leaving two defenders for dead with Peter Horne's conversion briefly bringing Glasgow level.

Nacewa used a Sexton pass to neatly unlock the Glasgow defence soon after, his converted try quickly followed by a Sexton penalty goal for a 17-7 lead.

After a maul had sucked in defenders, hooker Cronin bounced up off the deck to reach over on the half-hour mark. Running back a loose Glasgow kick, Jordan Larmour freed up Lowe out wide and Sexton was tackled short before Fardy dived over unopposed in the left corner.

Fardy and Lowe created Leinster's fifth and final try before the interval, with the latter putting Sexton over in the corner.

Robbie Henshaw had a try ruled out on the restart as sufficient advantage had not been played for Glasgow, before Fijian flyer Matawalu went on the prowl for another try-of-the-season contender from deep.

A 56th-minute maul set-up and McGrath's well-timed pass released Nacewa to complete his brace from close range. Ross Byrne, on for Sexton, converted but a free-flowing Glasgow attack, with Jackson and Matawalu to the fore, ended with number eight Ashe replying in the 61st minute.

Lowe crashed over from a Nacewa pass to open his Champions Cup account. Leinster faithful will hope it is the first of many. 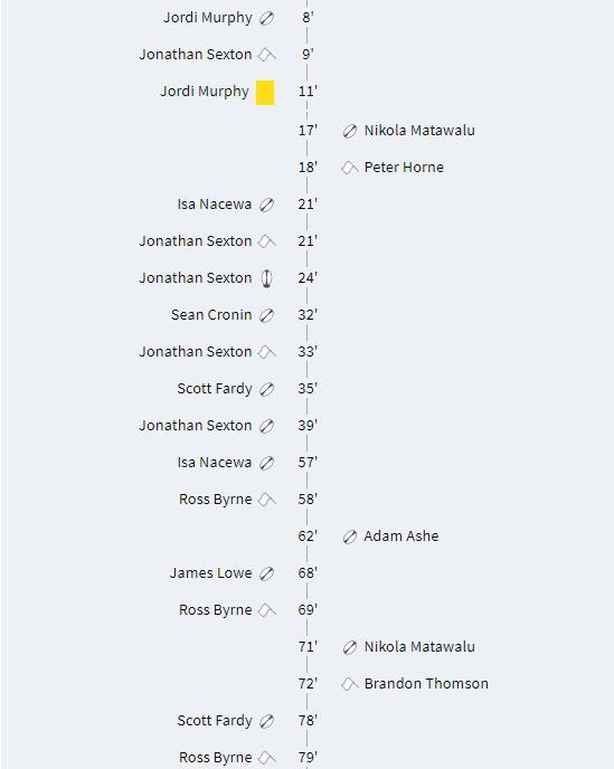