Irish Internationals Ultan Dillane, Bundee Aki and Kieran Marmion return to Kieran Keane’s Connacht side as they travel to Sixways to take on Worcester Warriors in the Challenge Cup on Saturday afternoon.

A win for the Westerners will secure top spot in Pool 5 and a place in the quarter-finals with a game to spare.

With James Cannon ruled out with injury, Dillane’s return will be a boost to the Connacht pack which includes loosehead Peter McCabe, who made his first start against Munster and tighthead Conor Carey.

In the back row Eoghan Masterson returns at blindside having been rested last week. Captain John Muldoon, who started in Connacht’s last victory in Sixways back in 2009, starts at number 8.

Scrumhalf Kieran Marmion returns to form a new halfback pairing with Craig Ronaldson as Jack Carty is rested from the matchday 23 after a hectic Christmas schedule. The backline is also boosted by Aki’s return where he will play alongside Tom Farrell.

The back three includes Tiernan O’Halloran at fullback and Darragh Leader and Niyi Adeolokun on the wings. Cian Kelleher is included among the replacements having returned from injury this week. 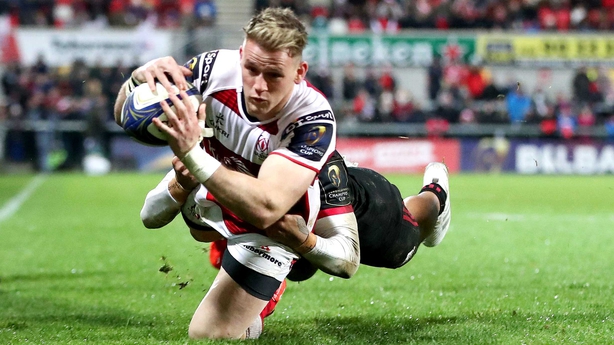 Craig Gilroy (above) and Louis Ludik return for Ulster as they look to trun over La Rochelle and keep their Champions Cup hopes alive.

The pair come into the backline after missing the Pro14 derby loss to Leinster last weekend, while John Cooney returns to start at scrum-half following a replacement appearance in the RDS.

Christian Lealiifano, who will be playing in his last home match for Ulster before returning to the Brumbies later this month, will partner Cooney at half back.

Ludik joins Stuart McCloskey in midfield, while Gilroy, Jacob Stockdale and Charles Piutau, who leads the way for metres made in this year's tournament (454), will make up the back three.

Alan O'Connor is reinstated in the second row, where he is paired with Iain Henderson. Abbey Insurance Academy player Nick Timoney will pack down at number 8, with Matty Rea and Sean Reidy named as the other loose forwards. Rory Best will again lead the side and he will combine with Callum Black and Rodney Ah You in the front row.

Johnny McPhillips could make his European debut after being included among the replacements.