A familiar face will greet Munster at the unique, domed U Arena for their Champions Cup clash with Racing 92 this Sunday, but Peter O'Mahony said it'll be "back to business" when he squares up against old team-mate Donnacha Ryan.

Lock Ryan, blighted by a neck problem, only made his Racing debut at the start of December having played his last game for Munster in last May's Pro12 final loss to Scarlets.

He's found his feet quickly though, figuring prominently in some impressive Racing performances, most recently Sunday's awesome 58-6 Top 14 annihilation of Clermont, in which he completed a full 80 minutes for the first time since his move.

O'Mahony accepted pool-toppers Munster face a difficult task at the weekend as they look to take a massive stride towards the quarter-finals, and said there'll be no room for sentiment  - or slow starts.

"(Donnacha) is a guy you want to have in your team," he told RTÉ Sport's Michael Corcoran.

"I played alongside him for a long time. It will be a bit strange coming up against him... but it's back to business isn't it? It's just the way it is in rugby these days." 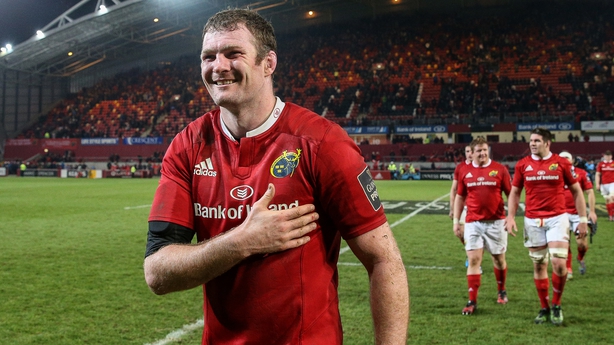 He continued: "They were 21 points up with not long gone on the clock (against Clermont). We found out against Leinster not too long ago - you let a team with that quality out ahead of you like that early doors you're going to be in trouble. We're under no illusions about the difficulty that lies ahead over there."

The slog to make it out of the pool stages in Europe's elite competition is relentless and gruelling. Munster could top their pool and still not be get a home quarter-final, but O'Mahony is only concerned with progression right now, and knows nothing will come easy.

He's warned his team-mates they may need to play better than ever before to escape with victory.

"Every year, it doesn't get easier and the games seem to get bigger and bigger," he said.

"As soon as you ship one loss you're kind of on the back foot so it's imperative for both teams.

"When you turn the page over to European Cup week you know straight coming in day one there's a buzz around the place. The challenges get bigger and bigger.

"We've a big opportunity at the weekend to put ourselves in a good position but it's going top take one of the best performances of this group's term to get there.

"It has to be another step up; it always has to go further in professional rugby. Coming up against a team like Racing, the depth they have, the players they have to call on, the form they're in - their win a the weekend was a bit more than impressive against Clermont - I think it's going to have to be our best (performance)."