Munster coach Johann van Graan piled praise on "top quality" head of athletic performance Aled Walters as he confirmed the Welshman will move on in March to link up with Rassie Erasmus in South Africa.

Walters has been with the province for five years and established himself as a key component of the back-room setup.

Erasmus, who left Thomond Park with defence coach Jacques Nienaber back in December to take the reins at the Springboks, has raided his old club again to take Walters overseas but Van Graan said it's a development that reflects positively on Munster, and insisted it won't disrupt the camp.

The IRFU are now inviting applications for the position of Head of Athletic Performance at Munster Rugby.

This role will manage and lead the athletic performance department at the province.

"He's been  a massive part of our coaching team here at Munster. You just have look at the guys to see the form they're in fitness wise, what a big loss it will be.

"We were informed about this quite a few weeks ago. He was open and honest about it. We wish him well.

"It's great that Munster can keep delivering international coaches, international management. Hopefully we will find a person who will fit in with the Munster way to add value here.

"The only constant in life is that there will be change. You've got to embrace change and use it to your advantage." 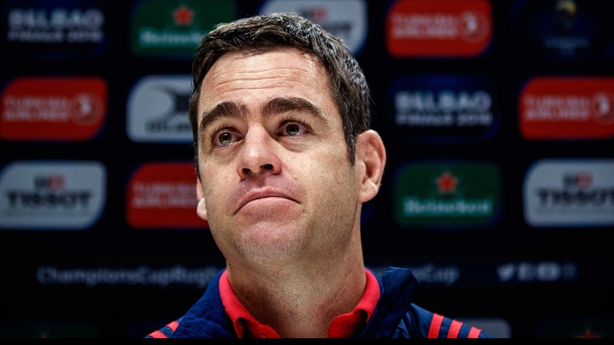 Conor Oliver, Chris Farrell and Rhys Marshall came through their return to action against Connacht on Saturday night and Gerbrandt Grobler will return to full training this week.

Billy Holland and Chris Cloete are following return-to-play protocols after getting bangs against Ulster and could both be in contention for the clash on French soil. Scannell, however, is a real doubt as he nurses damaged ribs.

"It'll be touch and go if he'll be ready," Van Graan added. "He took a big knock a few weeks ago (against Ulster). He's fighting to be back in the squad."