Munster have named a much-changed side for the Guinness Pro14 clash against Ulster on New Year’s Day at Kingspan Stadium, kick-off 5:35pm.

There are 11 changes to the XV that suffered defeat to Leinster in Thomond Park four days ago.

James Cronin, Niall Scannell and John Ryan start together in the front row for the first time this season.

Darren O’Shea joins Billy Holland in the second row with Holland taking over the captaincy duties for his 16th successive start in this campaign.

Tommy O’Donnell is the other forward to retain his place as he makes the positional switch to blindside for the round 12 encounter with Cloete returning to openside and Jack O’Donoghue starting at 8.

Keith Earls has recovered from illness to be named in the backline and joins Sammy Arnold in forming a new midfield pairing for the province, with Arnold switching to inside centre this week and Earls outside him.

With Alex Wootton again on the left wing, the academy’s Calvin Nash starts on the opposite flank for his first start of the season, and Simon Zebo completes the back three at fullback.

Duncan Williams and JJ Hanrahan form the half back pairing.

Winger Ronan O’Mahony has recovered from the fractured fibula sustained against Treviso last April to be included in his first match-day squad of the season on the bench.

If sprung from the bench, Jeremy Loughman, who was previously capped with Leinster, will make his Munster debut in Belfast.

Ulster’s Rob Herring has recovered from concussion and will captain their side as they welcome back some key men. 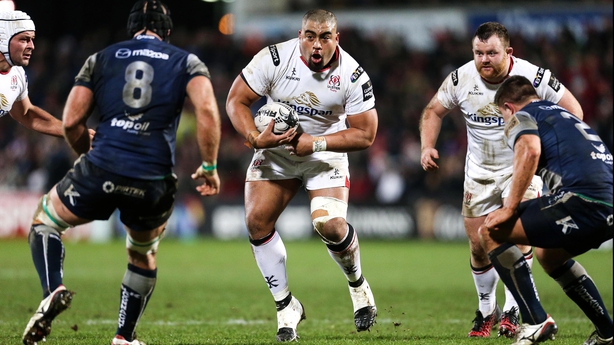 Rodney Ah You (wrist) and Kyle McCall (shoulder) have returned from two-month injury lay-offs and will join their skipper in the front row.

Alan O'Connor and Kieran Treadwell are reunited in the second row.

Jean Deysel, who has also been out of action for over two months, is named at number 8, with academy duo Nick Timoney and Greg Jones selected alongside the Springbok in the back row.

John Cooney and Christian Lealiifano are paired in the half back positions once again, while Stuart McCloskey and Louis Ludik will combine in midfield.

Rob Lyttle will make his first start of the season after being named on the left wing, as Craig Gilroy and Charles Piutau complete the starting XV.

A further two Academy players, Adam McBurney and Johnny McPhillips, are selected among the replacements.

Callum Black, Wiehahn Herbst, Robbie Diack and Matthew Rea will join McBurney as forward cover on the bench. The experienced Paul Marshall and Andrew Trimble, both of whom have over 200 Ulster caps to their name, round off the match day 23.