Jack Carty says Connacht are reaping the rewards of sticking to their guns after their 44-16 Pro14 win over Ulster made it three wins in their last three outings.

Two of those victories came in the Challenge Cup against Brive but prior to that Connacht had to re-group after defeats on the road to Zebre and Cardiff.

Last night’s emphatic win was just their fourth in the competition this season but the out-half was proud that the side had not changed their style.

"The manner of how we won the last two weeks has given us a lot of confidence, the heads-up rugby that we’ve been playing," Carty told RTÉ Sport after the six-try rout in the cross-conference clash.

"It’s something that we’ve been striving to do all year and there were certain situations where it was happening and a couple of occasions, Cardiff and Zebre, where it didn’t but it was important that we stuck to that game plan. 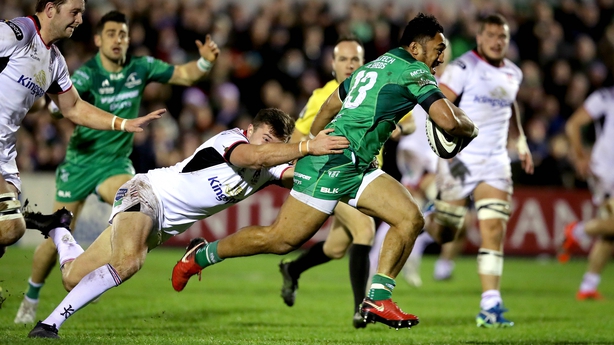 "The changing room is buzzing, the forwards gave us a great platform.

"The maul really paid dividends for us and once we got in the right areas of the pitch the lads were able to put pressure on them.

"It was great to drive it home and finish like we did.

"We were playing into a strong breeze. There wasn’t that much to kick at so we had to play direct and physical.

"The two boys in the centre, Tom [Farrell] and Bundee [Aki], got over the gainline

"We gave away some soft tries but it’s a great platform for us to build on to play Leinster in the RDS.

"There may have been situations before where we wouldn’t have put the foot on the throat and finished teams off but it shows where we’re coming to now that we’re able to finish a team like Ulster…that was fantastic." 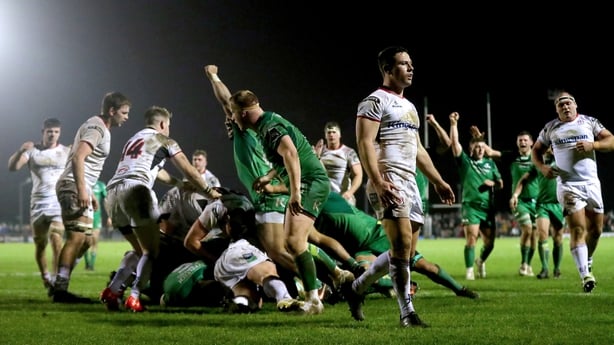 Kieran Keane’s side next face Leinster, flying high in Conference B and in Europe, at the RDS (live on RTÉ Radio 1).

Carty says Connacht will have to up their game if they are to get a rare win in Dublin.

"We’ve been there or thereabouts in the last couple of years," said the 25-year-old.

"We always go up to the RDS trying to create a bit of history and January 1 will be no different.

"Leinster will have their homework done on us. They’ll look at a few things from tonight.

"It’s important that we change up a few pictures for them and hopefully when we go up there we’ll be going all guns blazing to get the win."