The Blues were 13 points down in the 39th minute and had to deal with the permanent loss of Johnny Sexton after he failed a HIA, the temporary departure of his replacement Ross Byrne, who returned after an assessment, and yellow cards for Cian Healy and Scott Fardy.

But two penalties from the 35-year-old New Zealander, who finished with six kicks from six, saw Leinster claw their way back.

The comeback was completed with 13 minutes to play with Luke McGrath scored the winning try in a 22-17 victory.

"He steps up, six from six as well. His body is hanging together a little bit as well because he has come back off surgery and he’s probably not 100% right.

"But he’s an incredible individual in terms of self-sacrifice for the team. He’s well deserving of his man of the match [award].

"It was a game full of lots of different incidents and it was action-packed and I thought it was a great advert for the tournament." 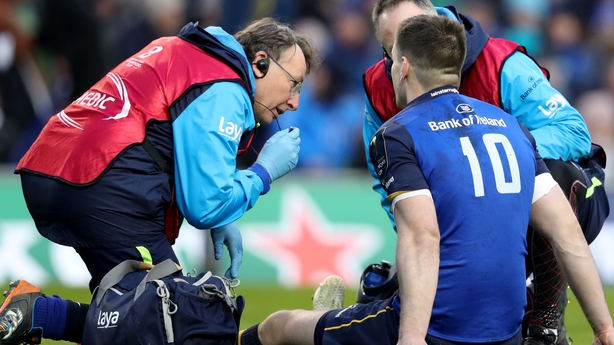 Asked about Sexton, who was withdrawn after colliding head-first with an Exeter attacker in the build up to their opening try – a worryingly common sight for Leinster and Ireland fans – the coach said that the former Racing 92 man was okay.

"He was up by the time we came in for half-time," he said.

"He was talking Ross Byrne through the game plan at that stage and talking him through where some of the space may be.

"You see him walking around the corridors here so he’s okay."

WATCH: Here's what Leo Cullen had to say after #LEIvEXE about the comeback win and the massive series of games coming up over the next month. #JoinTheRoar pic.twitter.com/mUXVY1KlQN