Ulster director of rugby Les Kiss was a happy man after his side's six-try 52-24 bonus-point victory over Harlequins which secured second spot in Pool One of the European Champions Cup.

Back-to-back wins over the Quins - who were already out of the running - have put Ulster in a position to potentially qualify with two rounds remaining though, even at this stage, their best chance may be as a runner-up.

"We were anxious to get out there and finish the deal," said Kiss. "And the boys wanted to make a major statement in this game in front of the fans.

"It certainly was a spectacle that's for sure. We have a chance to do something here, but La Rochelle (the pool leaders) are the form team in Europe.

"We opened them up nicely but we didn't capitalise and we shouldn't give a team like that a chance as they back their ability.

"They had a lot of youngsters and they told them just to play and they hurt us a few times." 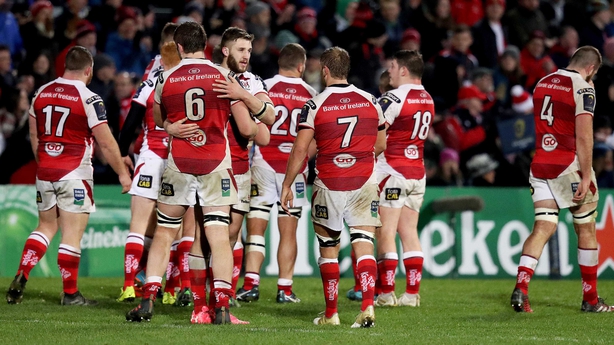 Ulster only led 16-12 at half-time before pushing on late in the game and Kiss admitted he was frustrated at some of their defensive lapses.

"It was a bit too loose at times but it was good to get 52 points," he said. "The key focus for us was to concentrate on the basics of the game.

"I think we'd just got a bit away from that (in the first half) and I thought we were a little bit lateral at times."

Harlequins' director of rugby John Kingston spoke of his pride after his side's performance, and though their bonus point is ultimately meaningless Kingston was happy to see his players chase it.

"It's a tough ask when it's a dead rubber," he said. "But it was a personal pride thing and a collective pride thing and I thought that six tries to four is what it was which I think was a fair representation of the game.

"I said to the players that we have to understand that we conceded points a bit too easily out there but I praised them for the effort and commitment they put in which they certainly did.

"They didn't stop trying right to the end. You're mindful that you've got further battles to fight."
The priority now for the Quins is the Aviva Premership.

"We're really disappointed that we're out of the Champions Cup but we've haven't been good enough to get out and we've got some massive Premiership games coming up," Kingston added.

"We remained competitive until about 10 minutes before the end when it got away from us.

"I think the penalty count was 10-6 against us and you can't expect to thrive away from home. It makes it difficult to get a toe-hold in the game."