Lansdowne head into the Christmas break with an 11-point lead at the top of Ulster Bank League Division 1A, after overcoming a spirited UCD side 46-30 on the Aviva Stadium's back pitch.

Mike Ruddock's all-conquering squad claimed their tenth straight league victory to keep up their unblemished run, and the highlight of their latest success yesterday was a hat-trick of tries from tricky scrum half Alan Bennie, one of their Ireland Sevens internationals.

The eager crowd were treated to 11 tries in all, six of which came in a very entertaining first half that saw Lansdowne shoot out into a 10-3 lead inside the opening ten minutes.

Winger Mark O'Keefe, whose brace of tries took his season's haul to six, and Bennie both did a lot of damage with their pace off the mark and eye for a gap, and three of the hosts’ first half tries were finished off in the right corner.

UCD, who trailed 25-15 at the break, hung in there despite regularly leaking scores. Stephen McVeigh notched their first try after his back row colleague Alex Penny had charged down a kick, and their second was a team effort to which centre Stephen Murphy applied the finishing touches.

They had the margin down to two points thanks to prop Liam Hyland's early second half touchdown, converted by 10-point out-half Harry Byrne. However, in between a yellow card for both sides, Lansdowne's forward power was rewarded with a penalty try and a 32-22 cushion.

With Bennie topping up his tally and replacement Adam Boland also getting over the whitewash, Lansdowne had a relatively untroubled finish, yet UCD made sure they collected a deserved bonus point - their eighth of both varieties in this 10-game block - when young full-back Steven Kilgallen, who was excellent under the high ball, scored out wide.

Doris played the final eight minutes of the Leinster 'A' team's British & Irish Cup bonus point win away to Bristol on Friday night, and then linked up with Mary's for this crucial basement battle in the midlands.

Buccs had won the sides' first meeting 11-10 in Dublin last Saturday, but they missed the Connacht Eagles quartet of Conor McKeon, Conan O’Donnell, Conor Kenny and Paul Boyle as Mary's stretched into a 15-6 half-time lead. 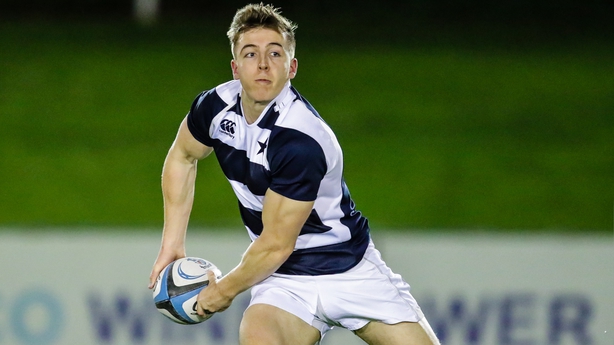 With the fit-again Sean Kearns (above) impressing on his return at out-half, the Dubliners weighed in with two first half tries at Dubarry Park, converting their pressure into points as Doris and full-back Terry Kennedy, on his return from Ireland Sevens duty, both touched down.

A slow-burning second half was dominated by the respective defences, with Buccs captain Shane Layden and Luke Carty, who had kicked a brace of penalties, trying their best to create opportunities for their top-scoring winger Rory O’Connor (seven tries).

However, it was a second member of the Mary’s back-three who put the result beyond doubt. Winger Myles Carey, who has been dovetailing between the club’s seniors and Under-20s this season, ran in the visitors’ third try which Kearns converted to put them well out of the Pirates’ reach.

Five points separate the bottom three sides in the Division 1A table with Mary’s now in eighth on 15 points - level with Dublin University - while Buccs (10 points) remain bottom but their recent performances suggest they can dig themselves out of trouble in the New Year.

Hooker Max Abbott’s brace of maul tries helped Cork Constitution see off a weakened Garryowen side 37-11 in the clubs’ Division 1A rematch at a cold and wet Temple Hill.

Owing to injuries and British & Irish Cup commitments with Munster ‘A’, Garryowen were missing six starters from last week’s 24-17 home win over Cork Con - and it showed as the Leesiders broke into a 17-6 interval lead.

The Con forwards flexed their muscles early on with Abbott driven over in the sixth minute, although the Light Blues strung together some decent phases for scrum half and captain Neil Cronin to pocket two penalty goals.

Tomas Quinlan, who contributed 15 points off the tee, landed his second successful kick to made it 10-6 to Brian Hickey’s men, and a well-executed rolling maul produced Abbott’s second score with 25 minutes on the clock.

The ball was like a bar of soap at times, in the slippery conditions, and the defending champions wisely kept play in the tight with two more Quinlan penalties sandwiching centre Ned Hodson’s 52nd-minute sin-binning.

With the Con defence continuing to give little away, a Conor Kindregan try at the other end sealed the result with 12 minutes remaining. Garryowen’s backs whipped the ball wide for full-back Lorcan Bourke to touch down in the right corner in the 78th minute.

However, Cork Con rubber-stamped their dominance on the day with an 80th-minute bonus point try, their maul again doing the damage as they marched their Munster rivals backwards and referee Eddie Hogan O’Connell awarded a penalty try.

The 26-point triumph has moved the Leesiders back into the top four ahead of the Christmas break, but before that they will meet Garryowen for the third week in a row, taking a return trip to Dooradoyle for next Saturday’s Munster Senior Cup semi-final.

Flanker Tony Ryan rescued a hard-fought 17-13 win for Clontarf as his late try denied a determined Dublin University side at a bitterly cold College Park.

Enniscorthy man Ryan showed his experience as he took a terrific line onto a pass to score in the dying minutes, as Trinity were left to rue their error-strewn finish to the game.

Clontarf had five points to spare when they entertained the students last week, and a similarly tight affair was in the offing yesterday when two James Fennelly penalties had Trinity leading 6-3 at the break.

Tony Smeeth’s youngsters deserved their lead, but an early second yellow sin-binning for lock Jack Dunne’s slap down invited ‘Tarf forward. The home side were not quick enough when defending a kick and winger Cian O’Donoghue crossed in the corner, with David Joyce adding a classy conversion from out wide.

Just over 10 minutes later, Trinity conjured up a superb response as American flanker Alex McDonald thundered through a gap and linked with full-back Michael Silvester who outpaced the cover to notch his seventh try of the league run.

Fennelly’s successful conversion gave Smeeth’s charges a three-point buffer. They were relieved to see ‘Tarf knock on after sticking a penalty into the corner, but Trinity’s own error count was rising and allowing the visitors to work their way into position.

Last season’s beaten finalists showed their experience and tactical nous to set up Leinster-capped back rower Ryan for the game’s decisive score, converted by Joyce, which has nudged Clontarf from fourth up to second in the standings. Following their seventh loss in ten games, Trinity have a battle on their hands as they have fallen into the bottom two.

Two very well-taken second half tries guided Young Munster to a much-needed 15-5 triumph over Terenure College in the second game of their back-to-back fixtures.

Munsters scored 12 unanswered points after the break to run out deserving winners at Greenfields, with teenage replacement Conor Hayes (52 minutes) and Ireland Under-20 international Jack Lyons (60) both dotting down.

Terenure had enjoyed a comprehensive 32-13 victory in the sides’ clash at Lakelands last Saturday. The return leg was scoreless until Young Munster out-half Shane Airey punished a maul infringement with a well-struck 18th-minute penalty.

‘Nure’s persistence paid off with a try in the final play of the first half, nippy winger Jake Swaine outfoxing the defence for his fifth try of the campaign and a 5-3 half-time advantage.

Munsters had lost replacement Gavin Ryan to the sin-bin three minutes before Swaine’s score, but Gearoid Prendergast's men lifted their performance up a level or two on the resumption provide some early Christmas cheer. 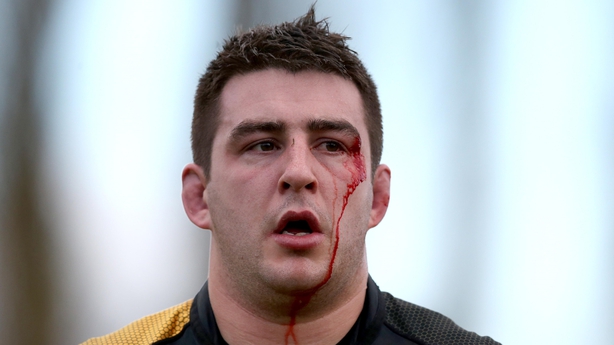 Led by captain Ger Slattery (above), the home forwards seized the initiative with some muscular mauling in the lead up to Hayes’ unconverted score. Their driving play was also crucial in setting up Lyons’ opportunity and he produced a fine finish, sniping through and stretching over the line.

Airey added the extras to put 10 points between the sides and Terenure were unable to respond in the dull and freezing conditions. The Cookies have moved up one place to sixth following their first win in four rounds.