Lansdowne completed an immaculate first half of the Ulster Bank League season with their ninth straight win, as a second-half scoring burst saw them overcome a feisty UCD side 30-23 at the Belfield Bowl on Saturday.

The Division 1A leaders also lifted the Sutherland Cup - presented in memory of Peter Sutherland's father, the great Billy Sutherland - courtesy of this three-try victory which saw talismanic out-half Scott Deasy kick 13 points. However, it was the students who made the early inroads with a couple of kicks towards the corner.

Harry Byrne, younger brother of Ross Byrne who was in action at the same time with Leinster in Treviso, fired over a 35-metre penalty to get UCD off the mark. He missed a second place-kick just four minutes later, with his effort dropping short and gathered under the posts by Deasy.

Byrne was back on target with his next attempt at the posts, making it 6-0 at the end of the first quarter. Deasy responded with a routine strike on 23 minutes but a similar kick at the other end from Byrne restored the six-point lead. The kicking duel continued but Deasy was surprisingly off target from close range.

The sin-binning of flanker Aaron Conneely was a further setback for Lansdowne. However, in his absence, they closed the deficit to 9-6 for half-time thanks to a Deasy penalty from the right.

The game began to open up more immediately after the restart, the visitors needing just three minutes for Deasy and full-back Eamonn Mills to combine and send centre Harry Brennan over for an emphatic try finish. Deasy converted for a 13-9 lead.

Before UCD could regain their composure, Lansdowne claimed their second try in the space of four minutes. Mike Ruddock's men developed a strong lineout maul after Deasy had kicked to touch, and hooker Ronan Kelleher, younger brother of Connacht winger Cian Kelleher, drove over for a converted score.

The family affair continued as Garry Ringrose's younger brother, UCD winger Jack, raced through for a much-needed try on the left, with Byrne superbly splitting the posts from the touchline. However, Lansdowne continued to do damage, especially up front, as Deasy knocked over his third successful penalty and a powerful attacking scrum saw referee Stuart Gaffikin award them a penalty try.

UCD now had a mountain to climb at 30-16 down, but to their credit, Andy Skehan's charges were resilient right to the last. They continued to probe for scores and were rewarded in the closing stages, with prop Jeremy Loughman carrying strongly into the Lansdowne half before Tommy O'Brien's excellent try, converted by his Ireland Under-20 colleague Ciaran Frawley, earned them a deserved losing bonus point.

Clontarf outscored Dublin University by four tries to three but were left clinging on for a 29-24 win at the end of an absorbing contest at Castle Avenue.

'Tarf had the match points within their grasp at half-time, leading 22-10 heading into the second half. However, they were left sweating at the finish as poor discipline saw them have two players sin-binned and captain Ben Reilly also saw red after clashing with Trinity replacement Darragh Higgins.

Trinity were held to 'nil' in two comprehensive defeats to the north Dubliners last season, and David Joyce and James Fennelly swapped penalties in a pacy opening to this rematch.

The hosts registered their first try on the quarter hour mark as they worked an overlap to put Rob McGrath over on the right wing. However, fit-again former Ireland Under-20 captain Jack Kelly was quick to respond, showing great strength to touch down after an initial grubber by Fennelly and a couple of fly hacks downfield.

Fennelly converted for a 10-8 lead, only for Clontarf's dominant scrum - minus Leinster debutant Vakh Abdaladze - to provide the platform for two converted tries before the break. A missed tackle allowed second row Cormac Daly through for a try, and a tug-back by Trinity scrum half Rowan Osborne saw 'Tarf awarded a penalty try.

Tony Smeeth's students did well to absorb further pressure while down to 14 men, before a high-quality attacking move off a five-metre lineout finished with captain Michael Courtney grounding the ball to put just five points between the sides (22-17). However, Trinity could not exit from the restart and 'Tarf squeezed them for the bonus point score, as centre Matt D'Arcy took his tally for the campaign to seven tries.

It was the students' turn to go through a purple patch, as the likes of Kyle Dixon and Michael Silvester slipped through defensive gaps. The hosts lost Tony Ryan, who took out Joe Byrne without the ball, and Jack Power to the bin in quick succession.

Trinity's in-form full-back Silvester collected a pinpoint kick from Fennelly to bag his sixth try of the season. Nonetheless, 'Tarf were able to hold onto their five-point lead despite having skipper Reilly, who struck out at Higgins, sent off for his second yellow card. 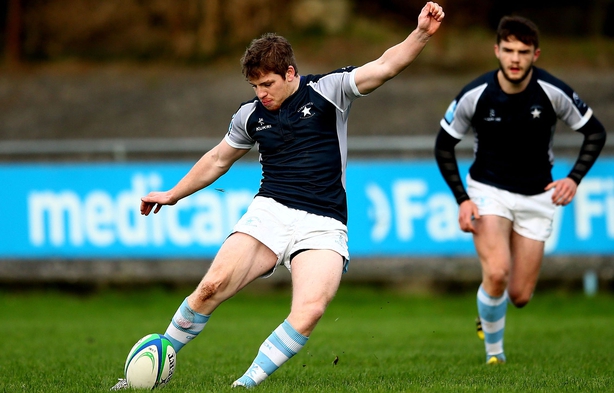 Goal-kicking captain Neil Cronin and elusive full-back David Johnston were the scoring stars for Garryowen in their impressive 24-17 Munster derby success against Cork Constitution at Dooradoyle on Saturday afternoon.

The first of two heavyweight back-to-back clashes, it was the Light Blues who made home advantage count with man-of-the-match Cronin accumulating 14 points and Johnston - the best attacker on show - notching a try in each half.

Johnston showed a clean pair of heels to the Cork Con defence to touch down in the 26th minute, adding to an earlier Cronin penalty. Tomas Quinlan's second penalty of the match closed out the first half's scoring, leaving the visitors just 10-6 behind.

With Munster's Mike Sherry and number 8 Sean Rennison playing key roles up front, the Limerick men got into scoring range for the ever-influential Cronin to snipe over and give his side at double-scores lead at 24-12.

Credit to Constitution, they forced a succession of penalties in the closing stages with Cronin playing the price with a yellow card. A prolonged bout of forward pressure yielded a try for prop Gavin Duffy, but it was only enough for a losing bonus point.

Ahead of next Saturday's rematch at Temple Hill, Garryowen have actually fallen one place to third due to Terenure College's bonus point win over Young Munster. Con are three points behind the Light Blues in fifth position.

Buccaneers came from 10 points down to record their second win on the bounce as they edged out St. Mary's College 11-10 at Templeville Road.

Luke Carty sandwiched hooker John Sutton's maul try with two crucial penalties as Buccs pulled off a gritty second half comeback. The result has moved Darin Claasen's midlanders to within one point of Mary's at the bottom of the Division 1A table.

This basement battle, which will have a second installment in Athlone next Saturday afternoon, looked to be going Mary's way when unconverted tries from Adam Coyle and Conor Dean gave them a 10-0 buffer at the break.

Ireland Under-20 international Dean, who impressed against Cork Con in round 8, is developing into a fine out-half and he had a fiercely competitive duel with Carty, the 20-year-old Connacht Academy member.

Coyle crashed over from a few metres out for his first league try for Mary's since his transfer from Naas. He was one of a number of former or current Ireland U-20 players on show, including Buccs number 8 Paul Boyle who recovered from injury to start.

Boyle and Pirates captain Shane Layden led by example as Buccs played their way back into contention during the closing 40 minutes, forcing a couple of penalties which saw Carty get them on the scoreboard.

Buccaneers' second wind was even more effective, a well-executed lineout drive teeing up Sutton, who put in another tremendous shift in the front row and the loose and deserved his try. Like Dean, Carty was unable to convert but he held his nerve to land the match-winning penalty in the dying embers.

Thanks to @YoungMunsterRFC - cracking game. Safe home to all those on the road back to Limerick.

This was a much more one-sided contest than many predicted as Terenure College ran in three second half tries to emerge as 32-13 bonus point winners over a fading Young Munster side.

After losing their last two games, Terenure have climbed back into second place in the standings. They flew out of the traps at a rain-hit Lakelands Park with early tries from flying winger Sam Coghlan Murray and powerful South African tighthead Schalk Jooste.

Munsters played to their strengths to get back on level terms early in the second half, using their strong set piece to win a penalty and force a levelling penalty try at 10-all.

'Nure replacement Niall Lalor saw yellow too in a double setback, and Shane Airey's 53rd-minute penalty - his second successful kick of the game - put Gearoid Prendergast's men ahead for the first and only time in the game.

The pendulum swung back in Terenure's favour by the 61st minute, though, as Mark O'Neill's boot brought them level before they capitalised on a Munsters sin-binning to release winger Jake Swaine who converted his own try.

Munsters' patched-up back-line were struggling and just two minutes later, outside centre Stephen O'Neill cut through for the bonus point score to give James Blaney's charges a 12-point advantage. The margin was 19 points by the final whistle as full-back James O'Donoghue became the third member of 'Nure's back-three to cross the whitewash.