Ireland survived a real scare at the Aviva and needed a late kick from Ian Keatley to beat Fiji 23-20.

Joe Schmidt’s second string had impressed in the early stages and led 17-10 at the break thanks to tries from Darren Sweetnam, Dave Kearney and Jack Conan.

But seven-pointers from the visitors either side of the break and a penalty from out-half Ben Volavola had the teams all square at 20-20 with just seven minutes to play.

Replacement Keatley then stepped up to kick the crucial score and keep Ireland’s winning streak, now at six games, going ahead of the visit of Argentina next week.

It took Ireland two minutes to get out of their own 22 but once they established ground in the Fiji half it didn’t take long for some Joey Carbery magic to unlock the defence.

The Leinster back, making just his second start for Ireland, spotted that he had Campese Ma’afu for a marker, duly sidestepped the prop, and ran into space before finding Sweetnam on the wing.

The Corkman dotted down in the corner for his first international try on his first start.

Although Ireland then dominated the possession and territory stats, loose play – firstly slow to a ruck and then a player going off his feet – in promising positions meant they failed to add to their tally.

Instead Fiji, who had won four of their previous five Tests, began to gel.

And when Ireland conceded their second penalty (of eight in total) in the 21st minute, Volavola obliged to make the score 5-3. 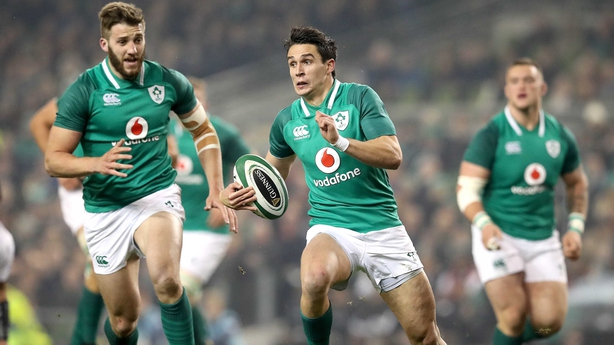 However, that only spurred Schmidt’s side on and from the kick-off Kearney found himself on the end of a move that included Stuart McCloskey, Carbery and man of the match Andrew Conway, all executing to perfection.

The Leinster wing dived for the corner for his fourth try from 18 appearances.

John McKee’s men did their best to get giant Montpellier wing Nemani Nadolo involved and he charged up the middle moments later but a group of three halted his gallop.

The sell-out crowd were brought to their feet seven minutes before the break, believing the hosts had their third try of the game.

Kearney raced away after an up-and-under in midfield and dived under the posts.

Conway, in support, screamed for the ball and drop-kicked the conversion, obviously in the belief that the TMO could not get involved post-kick.

However, that act may have served to arouse the officials’ suspicions and the big screen replay clearly showed it was the Munster player’s hand that knocked on the Garryowen.

But the third try duly came a minute later when Conan picked up a spilled ball in midfield and ran unchallenged to score his fourth try of the year in a green shirt.

That try handed Ireland a healthy 17-3 lead but Nadolo was to have the last say when he gathered the the ball on the wing in his own half, clipped ahead, collected and found support in Henry Seniloli, the scrum-half touching down under the posts.

Volavola’s extras meant the Flying Fijians were just a score behind at the break, 17-10.

It was sloppy from Ireland and there was more to come on the resumption.

Sweetnam had got the crowd on their feet with a scintillating run along the  tramlines before finding Marmion, who ran out of space. 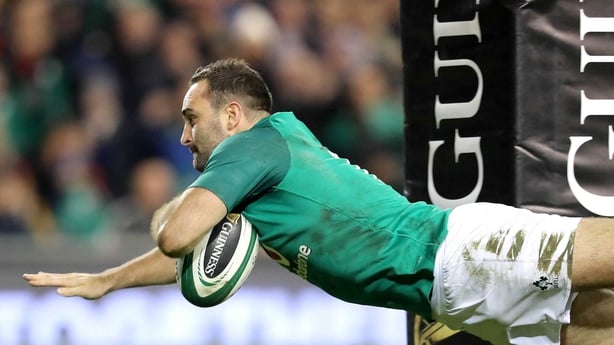 But moments later, Kearney carried the ball across the field but started to drift.

Timoci Nagusa, the former Ulster winger, read the pass, intercepted at the second attempt and raced under the posts, the conversion tying the game.

The Montpellier man almost had his second moments later but a fine passing move spluttered out just five metres from the line.

Schmidt sent on front rowers James Tracy, Tadhg Furlong and Cian Healy, who almost scored straight away after bursting down the left wing, tossing aside a would-be tackler along the way.

"Good performances in a scratchy team performance" - somewhat blurred view from Joe Schmidt after the win over Fiji pic.twitter.com/6BX3j9iP7E

There were 15 minutes left and Ireland, 27-point favourites ahead of kick-off, were in trouble.

Ian Keatley was called upon to replace the injured Carbery after the New Zealand-born back took a heavy but perfect tackle from replacement prop Peni Ravai.

Schmidt later said he feared that the 22-year-old had fractured a bone in his arm.

Conway was unlucky with a chip ahead that ran into touch before he could grab it.

One of Keatley’s first jobs was to edge Ireland ahead again. 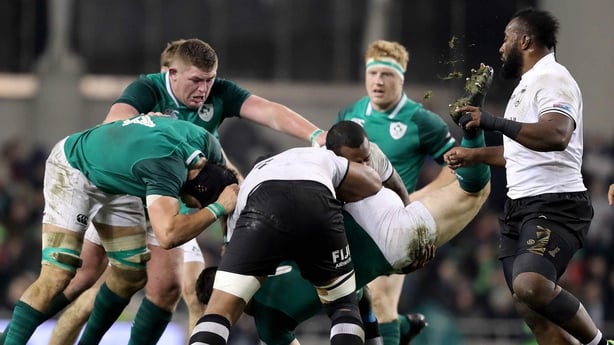 The Munster out-half popped over a penalty but that was soon cancelled out by Volavola’s three-pointer two minutes later.

Full-back Kini Murimurivalu then conceded the vital penalty, lifting Healy in the tackle.

Williams awarded a penalty only, seemingly not going further as a reward for the Fijian’s delicate placing of the Ireland prop on the floor.

Keatley made no mistake with what turned out to be the winning kick.