World Rugby chairman Bill Beaumont denied being humiliated after the global game voted against the recommendation and France was named host of the 2023 Rugby World Cup.

South Africa was named as the preferred host nation by World Rugby's independent review two weeks ago, but France won the right to host the tournament following a ballot in London on Wednesday.

A simple majority from the 39 votes was required and France claimed 18 votes to South Africa's 13 in the first round of voting. Ireland had eight votes and were eliminated.

The second round saw France claim 24 votes to South Africa's 15 to be named hosts for a second time, after 2007.

Beaumont had emphasised the "transparent selection process" before announcing the host, when World Rugby's member nations went against the recommendation.

Beaumont said he would follow the recommendation, but insisted the move was not embarrassing for the sport's world governing body.

"There's always got to be one recommendation in the evaluation process and that was South Africa. 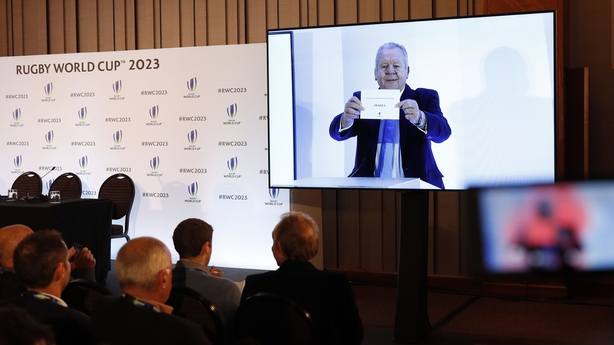 "If you look, there wasn't a great deal between France and South Africa in the evaluation report. It was very close.

"We feel the process has been absolutely transparent. Everyone's been able to see how the scoring was."

The 10th edition of the tournament coincides with the 200th anniversary of the birth of the sport, when William Webb Ellis picked up the ball and ran with it during a game of football at Rugby school.

The 2023 tournament follows the 2019 edition, which takes place in Japan.

England hosted the most recent tournament, in 2015, when New Zealand won a second successive title after victory on home soil in 2011.