Jack Conan knows how hard Ireland caps are to earn in the highly competitive area of the backrow, but he's hoping to get the opportunity to impress on what would be only his fifth cap on Saturday against Fiji.

The November Series got off to a better-than-expected start against a hapless South African side that shipped 38 points and rarely looked like inflicting damage on the scoreboard.

Joe Schmidt is expected to make a number of changes for the second of three games to test out the strength of his squad and welcome a Fijian side fresh off a 19-10 defeat to Italy last weekend.

A 39-point average winning margin in the previous four clashes between the sides means the visitors are rank outsiders at the Aviva Stadium, regardless if Ireland do go for a more experimental approach.

"There will be opportunities for guys this week to step up," Ireland’s skills and kicking coach Richie Murphy told RTÉ Radio Sport. "They have to take those jerseys and put in a performance similar to the guys last week.

"We have got a lot of guys in low single figures in caps, getting that experience and getting them up to speed, helping them fit in [to international rugby] is a massive part of that."

One of those players who could come into the fray is Leinster number 8 Conan. The abrasive forward knows the importance of making an impact in training under the watchful eye of Schmidt and his management team.

"If you are not involved, you still need to add your value in training to better the lads who are getting the nod to start, to make sure they are at their best.

"When you do get your opportunity, you have to put your hand up and take it, make the most of it, and show that you are ready to contribute."

"It was a massive testament [victory over South Africa] to how people worked, whether you got selected or not, the standard in training has been so high."

The backrow of Peter O’Mahony, Sean O’Brien and CJ Stander dominated their Springbok counterparts last weekend, while substitute Rhys Ruddock added to the performance with an eye-catching second-half display topped off with a try.

Conan, who made his debut in a 2015 World Cup warm-up game against Scotland, had to wait 666 days for his next taste of action in the green jersey against the United States in the summer, rewared for a fine season at provincial level.

With Jamie Heaslip and Tommy O’Donnell on the injury list, and the likes of Chris Henry, Jordi Murphy, Jack O’Donoghue and Sean Reidy not involved in the squad, Conan is determined to make the most of his chance should Schmidt plump for the 25-year-old.

"They don’t come around too often," he said when reflecting on Ireland caps. "I had to wait about two years for my second cap.

"I was fortunate enough to play consistently [for Leinster], play in the summer tour and I’ll be looking if I get selected to put my hand up again.

"CJ, Pete, Rhys and Seanie put in a massive 80 minutes between the four of them. They were fantastic and set the standard for backrows in the squad. Whoever gets the opportunity this weekend will have to go out and do the same, and better again."

Ireland v Fiji (5.30pm kick-off), is live on RTÉ 2 and the RTÉ Player from 4.30pm and on RTÉ Radio 1's Saturday Sport. RTE Sport Online will have a live blog from 5pm. 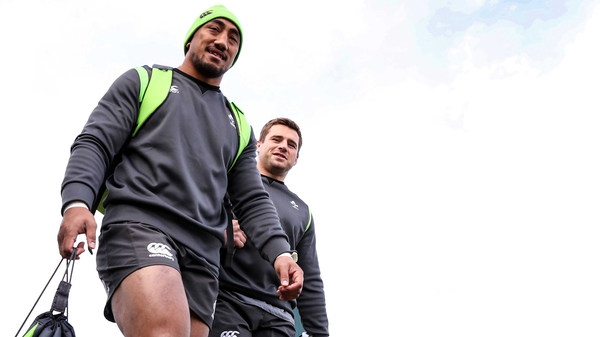