Joey Carbery is blossoming into a "special" attacking threat for Ireland, according to skills coach Richie Murphy.

Assistant coach Murphy admitted Ireland view the versatile Leinster playmaker primarily as a fly-half rather than a full-back.

Carbery should deputise again for Johnny Sexton from the bench when Ireland host Fiji on Saturday, though head coach Joe Schmidt could even be tempted to start the 22-year-old if he mixes up selection.

New Zealand-born Carbery boasts just one start in his five caps, but drew high praise from Murphy after another assured cameo in Saturday's 38-3 thumping of South Africa.

"You try to build opportunities in or around him and with some of our set-plays and stuff like that."

When asked if Ireland view Carbery as mainly a fly-half, Murphy replied: "That's where we see him at the moment but we do also realise he has the versatility of playing at 15, and he has also played at nine before.

"He is one of those players that's a little bit special because of his versatility.

"He's a great guy to watch. You try to build opportunities in or around him and with some of our set-plays and stuff like that.

"At the end of the day, he is one of those guys who has an ability to beat people and those guys don't come around very often in Ireland; there's plenty of them in Fiji. That makes him a little bit special and a little bit different."

Carbery made his Test debut when Ireland claimed their maiden victory over New Zealand, the 40-29 triumph at Chicago's Soldier Field in November 2016.

The accomplished performer booted a late conversion to seal that famous win, and has progressed solidly since. 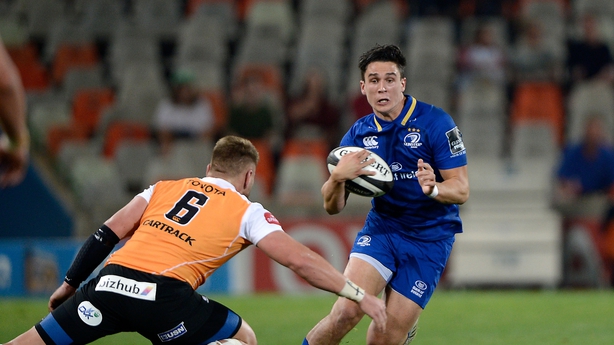 Ankle trouble denied Carbery the chance to tour Japan in the summer, but assistant coach Murphy believes he has still stepped forward since last November.

"If you look at where he was this time last year to where he is now, he's obviously that year older and he's filled out a bit," said Murphy.

"He's a little bit stronger and has come into our environment more as a 10 than as a 15 at the moment and he's stepped up really well. He's organised others around him and has fitted into that role really well.

"From my point of view, one of the things is goal-kicking, and he hasn't had the opportunity to do that on a regular basis but the two strikes at the weekend were fantastic and we'll be looking forward to him getting a bit more opportunity in that area over the next couple of weeks.

"When you don't goal-kick on a regular basis at your club and you have to step up in front of 50,000 and it's an international, it's a pretty daunting place to be.

"He's a strong man, he's got a real focus on what he's going to do in training and to bring it into the match.

"He stood up at the weekend which was fantastic. There will be more opportunities for him to do that again."

Ireland v Fiji (5.30pm kick-off), is live on RTÉ 2 and the RTÉ Player from 4.30pm and on RTÉ Radio 1's Saturday Sport. RTE Sport Online will have a live blog from 5pm.