Ireland began their November Series with a record four-try victory over a disappointing South Africa at the Aviva Stadium.

The Springboks arrived without a win in four games and never looked like threatening an upset in Dublin 4.

The pre-match debate had been dominated by the inclusion of New Zealander Bundee Aki, who became the latest player to qualify under the now-extended three-year residency rule.

Naturally enough the 27-year-old was involved in the first action of note.

The Connacht centre combined with man of the match Johnny Sexton to double-team Coenie Oosthuizen, the prop fell awkwardly and had to be replaced by Wilco Louw, making just his second international appearance, in the second minute.

The loss of the 30-cap tight-head seemed to upset the visitors and they infringed at the first three scrums, Sexton knocking over two kicks in the opening 15 minutes.

Ireland led by six despite not moving far beyond the South African 10 metre line. 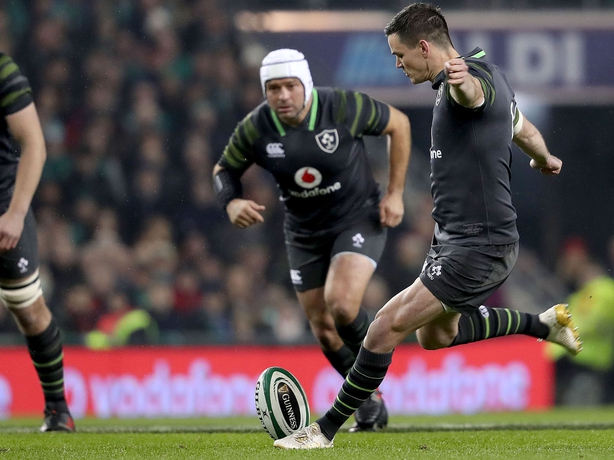 That first deep foray came off a well-worn Sexton loop move that set the lively Conway free, and 28-year-old referee Ben O’Keeffe from New Zealand awarded Ireland another penalty when a stray South African boot kicked the ball out of a ruck.

The hosts were well on top and the Springboks kickers couldn’t find their range, inviting wave after wave of Irish attack.

Invariably those exchanges ended with an advantage to Ireland.

So it was no surprise when the hosts grabbed the first try on the game in the 25th minute.

Winger Courtnall Skosan made a meal out of Conor Murray’s up-and-under and Conway plucked the ball out of a mess of dark green and dark grey shirts to sprint 20 metres to score his first international try.

Sexton’s kick from the sideline struck a post but Joe Schmidt’s men had a deserved 14-0 lead.

The Rugby Championship side were a mess to this point but their first piece of cohesion, after half an hour, led to a midfield penalty.

The kick was declined, South Africa’s pack looked to smash a hole in the Irish defence but a combination of Peter O’Mahony, Sexton and CJ Stander, playing against his native country, stood firm to win a relieving penalty.

That was as close as Allister Coetzee’s side came to a score and the half ended with a Peter O’Mahony turnover in Springboks territory.

The southern hemisphere side looked sharper on the restart and just three minutes in out-half Elton Janjies kicked their first points after Stander went high on the Tendai Mtawarira, the Beast tame to this point.

Still, Schimdt would have been content with proceedings so far but then two mistakes – first allowing flanker Pieter-Steph du Toit interfere in a promising-looking maul in the 22 and then Iain Henderson running into Murray’s channel – will go down in the head coaches’ ‘massively frustrating’ column.

It was infectious. Robbie Henshaw, outside centre, knocked on under no pressure, and the two-time World Cup winners were being invited back into the game.

The rot was stopped, however, when Sexton popped over his fourth penalty of the day after some lazy Springbok play at a ruck just outside the 22.

The game, not the prettiest seen in the Aviva, then turned downright scrappy.

The game needed a big moment and it was provided by Stockdale, quiet to this point, the Ulster wing dumped Dillyn Leyds on his back, earning a huge cheer from the sold-out Lansdowne Road stadium.

What a try it was! Rhys Ruddock gets the score but watch the pass from Robbie Henshaw - beautiful! #IREvRSA pic.twitter.com/hLmatVzN7z

Ireland put the game to bed moments later when Ruddock, on for 50-cap man Sean O’Brien, produced a sublime finish after getting the ball five metres out.

Sexton kicked the extras to push the lead out to 24-3.

Replacement hooker Herring extended the margin when he touched down after a lineout maul, Joey Carbery adding the conversion.

Munster wing Darren Sweetnam came on for his debut and he helped set up Stockdale’s late try, a sweeping move that ended in the far corner to put a real gloss on the scoreline.