A superb solo try from Niyi Adeolokun inspired Connacht's 23-15 Guinness PRO14 win over the Cheetahs at the Sportsground.

The Ireland winger, making his first senior start since knee surgery in the summer, struck in the 12th minute to set Kieran Keane's men up for a 13-3 half-time lead.

The Cheetahs hit back with final quarter tries from replacement Shaun Venter and Makazole Mapimpi - his eighth of the campaign - but Steve Crosbie's 73rd-minute penalty guided the westerners to their fourth successive victory in all competitions.

Although Stapelberg managed to block down his opposite number Jack Carty, the Cheetahs struggled to make headway.

Connacht were at their clinical best when superb hands from Ronaldson and McCartney invited Adeolokun forward and he burned past Luther Obi and Fred Zeilinga for a scintillating score behind the posts.

After adding the simple conversion, Ronaldson pushed a long-range penalty wide before the pace of Mapimpi briefly caused the hosts some problems. The pressure was relieved by a well-won Eoin McKeon penalty.

Adeolokun then felt the full force of a thumping tackle from Cheetahs full-back Zeilinga which halted a promising Connacht attack, but Ronaldson rewarded a subsequent scrum with three more points.

The visitors came more into it approaching the interval, Nico Lee running hard in midfield and Stapelberg got them off the mark with a well-struck penalty.

The Cheetahs stand-off missed a long-range kick on the resumption, and Connacht were not long in adding to their tally as the wind and rain started to have more of an influence. 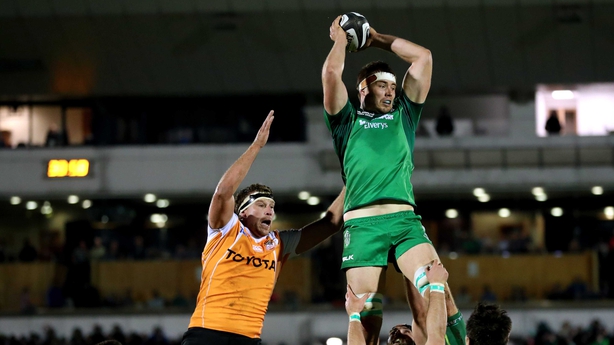 Excellent hands from man-of-the-match O'Halloran allowed Adeolokun to threaten out wide before the province's forwards took over and hooker McCartney was driven over just to the left of the posts.

Carty converted for a 20-3 scoreline and neither side covered themselves in glory during some error-strewn passages of play, which included three overthrown lineouts from McCartney's replacement Dave Heffernan.

The Cheetahs showed why they are currently third in Conference A when Venter shrugged off Matt Healy's attempted tackle for a 40-metre run to the whitewash. The 67th minute score went unconverted.

Aided by replacement Crosbie's subsequent penalty, Connacht managed to hold on despite leaking a late try to the jet-heeled Mapimpi, who finished brilliantly on the left after Reniel Hugo's quick tap penalty.