Most of the pre-match talk at the Sportsground surrounded Connacht's Bundee Aki receiving an Ireland call-up while Simon Zebo was left out Joe Schmidt's squad for the autumn internationals, but it was the Munster back who scored the opening try.

A well-crafted 22nd-minute try from Tiernan O'Halloran closed the gap, before Ian Keatley and Jack Carty swapped penalties for a 13-10 Munster lead at half-time.

Carty's second penalty of the night drew Connacht level before Munster had winger Andrew Conway sent off in the 61st minute for an elbow on the fly-half.

Replacement JJ Hanrahan managed to kick Munster back in front but it was his poor tackle attempt that allowed Connacht centre Farrell cut through for the game's decisive score.

Apart from new Ireland call-up Aki stripping the ball from his future international team-mate CJ Stander's grasp, it was all Munster early on and they deservedly hit the front in the fourth minute. 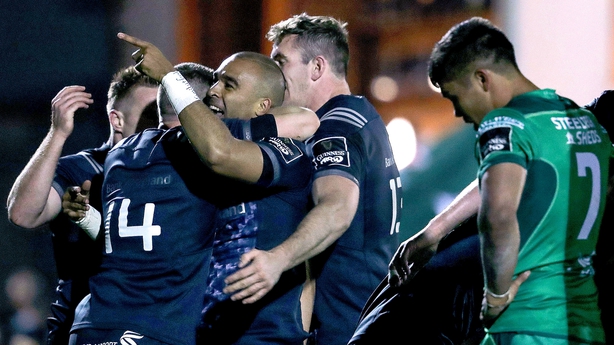 Connacht got the shove on at a defensive scrum in their 22, but Rory Scannell tidied up the loose ball with a brilliant run, offloading for Zebo to evade the clutches of O'Halloran and touch down.

Keatley converted and nudged over a penalty to put Munster in double figures, but Connacht were rewarded early in the second quarter.

Carty slid a penalty wide from the right wing, before a slashing break from Darragh Leader ignited the hosts. Aki showed terrific hands to send man-of-the-match Jarrad Butler through a gap and his final pass put O'Halloran in behind the posts.

Carty's simple conversion was cancelled out by a Keatley penalty on the half-hour mark after his former Connacht team-mate John Muldoon for not releasing a tackled player.

Carty kicked penalties either side of half-time to give his side the lead before a leaping Conway saw red for taking out Carty near halfway, with referee Nigel Owens consulting with TMO Brian MacNeice before making his decision.

Hanrahan looked a possible match-winner, landing a crisply-struck 65th-minute penalty, but he was mostly at fault when Farrell hared on to a pass and split open the Munster midfield for his try, converted by Craig Ronaldson.

Munster lacked the necessary composure to manufacture a late response. Kevin O'Byrne fumbled possession off a grounded maul and then a final error from Hanrahan confirmed Connacht as derby winners.