After a scoreless but absorbing opening hour in windy conditions, converted scores from Murray and replacement Andrew Conway had the hosts in control on their way to opening their win account in Pool 4.

However, a Leone Nakarawa try in addition to a dominant finish from the Racing pack, meant Munster were relieved to hang on for victory.

There was a poignant start to proceedings in Limerick as Anthony Foley was remembered with a minute's applause, a year on from his death before a match involving these two sides.

Although Thomond Park debutant Dan Carter took heavy contact to his knee early on, Racing, who lost twice to the Irish province last term, were first to settle and heavily pressurised the Munster lineout. 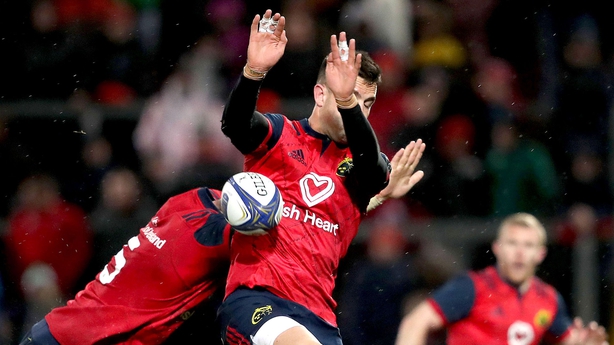 Half-backs Ian Keatley and Murray booted the home side deep into Racing's half, but their Kiwi hooker Rhys Marshall, who went close from an initial maul, let the visitors off the hook with a subsequent overthrow.

Further opportunities were missed by Munster, who turned down successive shots at the posts into a swirling wind. The Racing defence duly held out with flanker Wenceslas Lauret winning a key penalty at the breakdown.

The tables were turned with a sustained bout of Racing pressure approaching the half-hour mark, crucial tackles from Rory Scannell and man-of-the-match Dave Kilcoyne keeping them out as Maxime Machenaud and Antonie Claassen became more influential.

There was another huge impact between centres Anthony Tuitavake and Scannell, both defences giving little away with wind-backed Racing unable to convert their 67 per cent share of first-half possession into points.

Munster were the aggressors on the resumption, Keatley's cross-field kick finding Darren Sweetnam, who was tackled into touch by Pat Lambie and a sublime behind-the-back pass from Simon Zebo almost releasing Keith Earls for the left corner.

After Racing blew a couple of gilt-edged chances from mauls, a scrappy spell was broken up by Murray's breakthrough try, the Ireland and Lions star blocking Machenaud's kick at the side of a scrum and gathering the loose ball to score in the left corner. 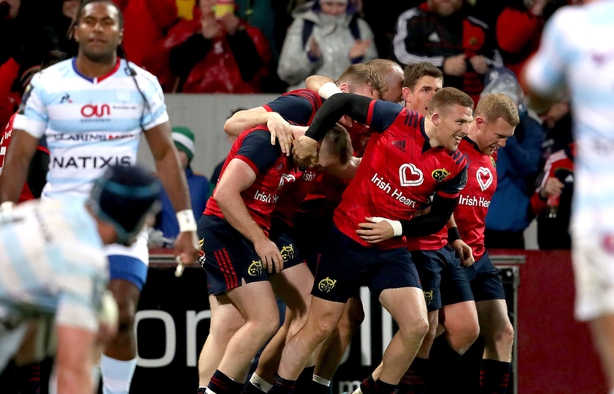 The momentum was with Munster as Keatley converted and their scrum launched them forward again, although Keatley missed a very kickable penalty.

Nonetheless, with Earls and Kilcoyne gaining ground in the visitors' 22, a purposeful attack ended with Zebo's cut-out pass and a final delivery from Scannell sending Conway over in the right corner.

Having been fortunate to draw with Castres last Sunday, it seemed Munster were back on track as Keatley added a terrific conversion to extend the lead to 14 points.

But, this looks destined to be a fiercely-contested pool as Fijian giant Nakarawa lunged over from a ruck to earn Racing a losing bonus point.

Their international-laden bench almost forced a late levelling score, but Baptiste Chouzenoux knocked on at a lineout.

AS IT HAPPENED: MUNSTER BEAT RACING