Glasgow wing Tommy Seymour is wary of facing a Leinster side packed with "world class individuals" at Scotstoun this weekend.

The Warriors face a crucial second game in their European Champions Cup campaign against the Irish side after losing their opener on Saturday.

Glasgow went down 24-15 to Aviva Premiership champions Exeter, and now face Leinster, who are likely to strengthen their victorious side with the additions of British and Irish Lions duo Jonny Sexton and Sean O'Brien to the starting line-up.

The pair are two of five Leinster players who travelled to New Zealand with Seymour in the summer, but missed out on the win over Montpellier through injury.

Seymour admits it will be a tough task against familiar opposition.

"We'll learn from our mistakes, but we're fully focused on Leinster."

"They are world class individuals and add a lot to a side," he said. "Leinster are already stacked and have great strength in depth and had a great win at the weekend despite having those guys on the sidelines so obviously it shows the quality they have.

"When you add in these world class players, it's pretty strong opposition to come up against and we'll be looking to make sure we try and nullify those threats they have all over the park as early as possible."

There was disappointment in the Warriors' camp following the defeat at Exeter which saw an end to their winning start to the season, and Seymour admitted they need to sharpen up if they want to make an impression in a tough competition. 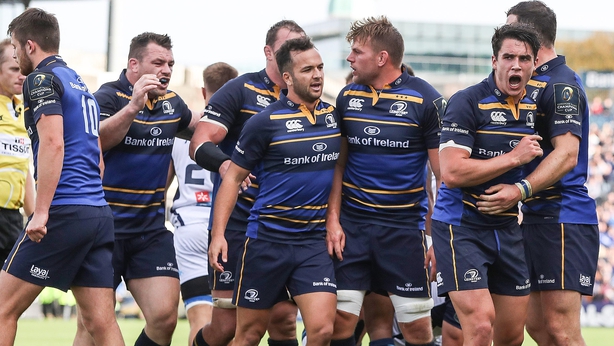 He said: "You're under pressure from round one, and if you don't pick up a win then you're chasing some teams in your pool and ours is an incredibly difficult one to get out of.

"We know we didn't click fully on the weekend. There's a few things we left out on the park and didn't execute properly.

"They were pretty ruthless but we have areas we need to sharpen up on and we knew that coming off the pitch.

"There's not much time to dwell on mistakes, and we've just tried to park that out of respect for Leinster and the competition itself.

"We'll learn from our mistakes, but we're fully focused on Leinster."