Munster survived a second-half Castres onslaught to escape from Stade Pierre-Fabre with a hard-fought 17-17 draw in their Champions Cup Pool Four opener.

The Irish province had won nine of the previous 12 meetings between the sides, but could not add to that number on their 159th Champions Cup appearance, which coincided with the first anniversary of coach Anthony Foley's death in Paris.

With what would turn into an increasingly capricious wind at their backs early on, Castres dominated the opening exchanges. But they could not make their pressure count until centre Robert Ebersohn intercepted a Munster pass on halfway to race unopposed under the posts on 12 minutes. Benjamin Urdapilleta added the extras. 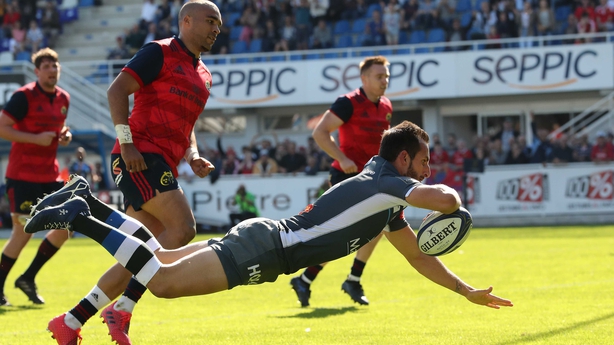 Connor Murray was already in the sin-bin for a desperate tap-tackle on Yannick Cabellero without the ball when the flanker looked through on goal. And Simon Zebo was perhaps fortunate not to join his club and country team-mate on the sidelines little more than a minute later after what looked like a deliberate knock-on five metres from his own line. Referee Matthew Carley decided a penalty was sanction enough.

Munster finally opened their account on the half-hour. Zebo crashed over from close range as the visitors made the most of their first serious visit into Castres' red zone. Tyler Bleyendaal levelled the scores at 7-7.

But the Top 14 side were back in front inside two minutes. Zebo's opposite number Julien Dumora waltzed home after captain Rodrigo Capo Ortega had blitzed through Munster's defensive line. Urdapilleta again converted.

Bleyendaal then cut the deficit to four points with a penalty two minutes before half-time, after Ebersohn had been sin-binned for an infringement under the posts. 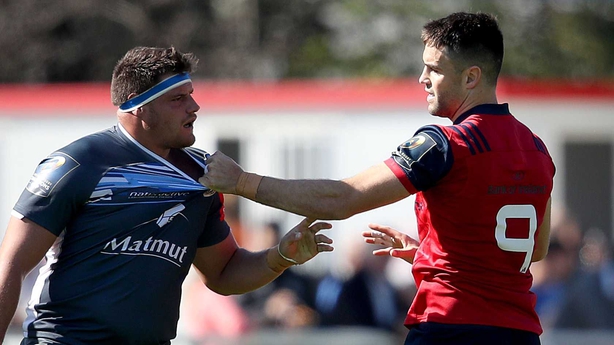 Munster briefly took the lead six minutes into the second period when prop Dave Kilcoyne powered over from a five-metre lineout, and Bleyendaal added the extras.

But Murray gave Urdapilleta the opportunity to level via a penalty moments later, and he made no mistake.

Castres thought they had surged ahead again just before the hour, when Anthony Jelonch broke from the back of a rumbling maul and fed Rory Kockott, but the scrum-half put a foot in touch on his way to the line.

Two minutes later, with the home fans on their feet again, Afusipa Taumoepeau was bundled into touch following a barnstorming break from number eight and man of the match Maama Vaipulu.

Replacement fly-half Ian Keatley had a chance to restore Munster's lead, but fired a 67th-minute penalty just wide. By now the visitors were in control, keeping Castres pegged back in their half - but Munster could not find a way through the determined French defence.

Castres could have won it late on, however. The strong breeze held up Urdapilleta's 78th-minute penalty, before the Argentinian fired an after-the-hooter drop-goal attempt wide of the upright.