Munster-bound back row Tadhg Beirne started at No. 8 for Pro12 champions Scarlets in their 21-20 defeat away to Toulon this afternoon.

Beirne fared well in an unfamiliar position, executing a number of turnovers and carrying well throughout as the Welsh side claimed a creditable losing bonus point in the south of France.

The Kildare back-rower was sin-binned in the closing stages and finished the match on the bench as Scarlets successfully prevented Toulon adding to their lead.

The Dungannon fly-half wasn't flawless from penalty goals, missing a potentially crucial one in the latter stages which might made for a more relaxed final ten minutes.

As it was, a try from No. 8 Sam Simmons sealed the win for the hosts.

The lock played 72 minutes before making way for Tutaia. Daniel Ramsay and Colin Slade had the French side in command before the vistors rallied through Ruan Ackermann and Ben Vellacott.

Frank Halai tore upfield to snatch a breakaway try that settled it, though Henry Purdy's try at the death did earn Gloucester a losing bonus.

?? Thanks for your support again at Sixways today.

Neither Donnacha O'Callaghan or Peter Stringer featured in Worcester Warriors opening game in Europe's second-tier competition against Brive, but the Premiership club had a good day the office.

Joe Taufete’e ran in a first-half hat-trick to leave the hosts 17-10 ahead at the break.

Guillaume Namy had bagged Brive's try in the opening half and he dotted down again on the turnaround but Ethan Waller wrapped up the bonus at Sixways, though Julien Brugnaut did make it a nervy finish for Worcestert with a try seven minutes from time. 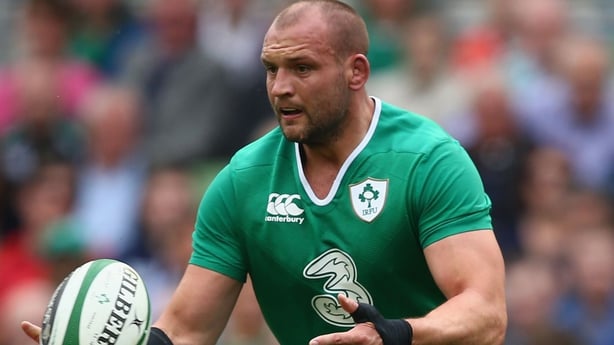 New signing Dan Tuohy (above) was added Leicester Tigers' Champions Cup squad last week but he had to watch from the bench as his side went down 22-18 to Racing 92 in the Champions Cup.

The 32-year-old forward -capped 11 times for Ireland - has arrived from Bristol on loan.

Leone Nakarawa, Bernard Le Roux and Teddy Thomas tries ultimately opened up a gap too big for Leicester to bridge in France but they did take a losing bonus point from the Pool 4 opener.

Prop Moore replaced Jake Cooper-Woolley but he couldn't stop the hosts running out 19-9 winners, as second-half tries from Jacob Stockdale and Stuart McCloskey made it a perfect Pool 1 start for the province.