Quick-fire second-half tries from winger Jacob Stockdale and centre Stuart McCloskey saw Ulster come from behind to open their European Champions Cup campaign with a 19-9 win over Wasps in Pool One at the Kingspan Stadium.

Ulster had been trailing 9-3 early in the second half but took ownership of the game in the 54th minute when former Wasps player Charles Piutau created Stockdale's score which was his fifth in five games. Two minutes later Piutau and Stockdale combined again before McCloskey barged over.

Christian Lealiifano then closed the game out for Les Kiss's men with two late penalties to deny a lacklustre Wasps a losing bonus point as Dai Young's off-form side fell to a fifth straight defeat.

Ulster's other points came from a John Cooney penalty in the first half while Wasps managed two penalties from Jimmy Gopperth and one from Elliot Daly.

Wasps had led 6-3 at half-time after a first half of poor quality with Cooney's penalty for Ulster being sandwiched between successful efforts from the visitors through Daly and, right on the stroke of the break, Gopperth.

But Cooney levelled the scores just before the quarter of the hour mark following Jacob Stockdale's break which again saw Wasps offside near their posts.

Former Wasps player Piutau showed his class with a break-out launched from deep but Cooney's grubber to Lealiifano ended up in touch. 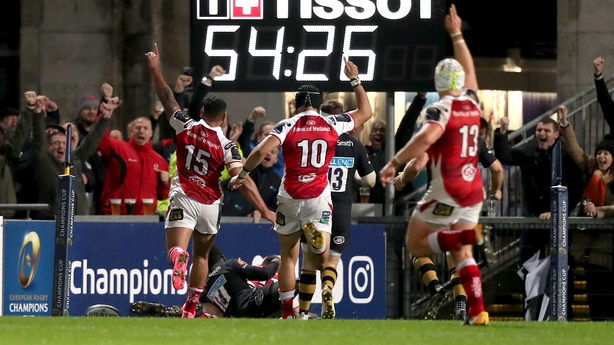 The visitors spurned two scoring chances from close-in as Ulster sacked their driving maul on two occasions - with Iain Henderson, debuting as skipper, to the fore on the second - to lift the siege.

A very scrappy first half ended with a scrum penalty against Ulster and Jimmy Gopperth nudged Wasps ahead 6-3 in the 40th minute.

Gopperth extended Wasps' lead to 9-3 six minutes after the restart when McCloskey was penalised for going off his feet.

Ulster then put a kickable penalty into the corner and Lealiifano had what appeared to be a 52nd minute score ruled out by the TMO for being just short of the line.

But the Irish province came again five minutes later and after Piutau challenged Willie Le Roux after his kick-chase, Stockdale broke free before combining with Piutau who threw him a return pass.

The Ulster winger was then tackled by Christian Wade but threw a high pass inside which McCloskey collected to dot down. Cooney's conversion hit the upright and stayed out but the home side now led 13-9.

That became 16-9 on 69 minutes when Lealiifano slotted a penalty and he did so again with five minutes to go after Daly was yellow-carded for a high hit on Louis Ludik.