Munster haven't won at the Lansdowne Road venue since 2014 and were punished by the boot of Johnny Sexton - whose haul of 13 saw him become Lienster's all-time points scorer - in a 23-17 defeat.

Although Keith Earls earned a losing bonus point with a well-worked try at the death, it was a performance that left Erasmus tearing his hair out.

"They probably deserved to win. Our discipline was terrible," he told RTÉ Sport.

"In the first half we conceded eight penalties to one, and then another three after half-time. You can only point your finger at yourself. 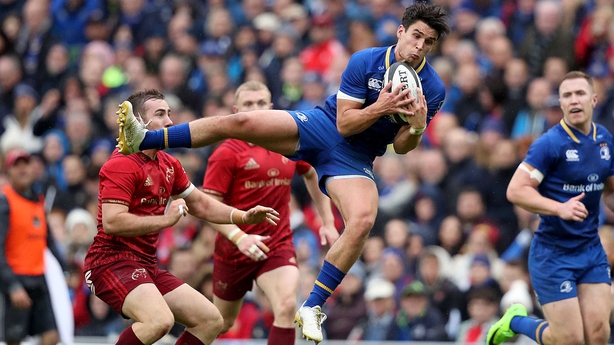 "We can only look at ourselves. It's a simple thing: don't give penalties away. We still scored three tries and they scored their points from penalties. It's our own fault.

"We got a bonus point out of it; we tried a few different things in our team selection to know what we have going into Europe so they're positive but the negative is on the scoreboard.

"We played around with some combinations, we got match fitness into different guys. The only guy who doesn't have match fitness now is Simon Zebo. We'll manage that next week."

For his opposite number Cullen, it was a job well done.

His men now face into a Champions Cup double-header, against Montpellier and then Glasgow Warriors, and Cullen expects the intensity to rise higher again.

"There a lot of really good things. It was a little bit mixed in the second half. It was a good physical game, as we expected. It was fantastic to get that level of support and crowd out there.

"You can see guys are properly blowing out there, both sets of players. We've got two huge games coming up now. Hopefully we'll get a big crowd in the RDS against Montpellier on Saturday.

"It's going to be a huge challenge for us."