Les Kiss toasted a "bizarre moment" of Ulster brilliance that saw Jacob Stockdale dive over for the winning try in Friday night's Pro14 derby against Connacht.

A scintillating Charles Piutau counter from his own 22 ended with Stockdale crashing over after terrific link-up between the two carved the Westerners wide open.

Try of the season? @UlsterRugby's Piutau and Stockdale link up from their own half to score between the @connachtrugby posts pic.twitter.com/g07p1MlMqH

That score took the hosts 16-8 clear at Kingspan Stadium and they closed it out for a gritty win.

"Tough match, really tough match, but we knew it would be," Kiss told RTÉ Sport afterwards.

"It was a stop-start game at times but it had moments, flashes of brilliance from both teams. In the end it's nice to prevail.

"It's hard to find flow in an interpro. Everyone knows each other so well. The stakes are high.

"You've got to expect that and stay tough in the moments where you have two or three errors in a row, or the opposition gets a bit traction in the game. The interpros are great games to see where you are in terms of your character stakes."

Of Stockdale's try he added: "It was a sort of a bizarre moment wasn't it? (Piutau and Stockdale) got to the edge and showed a bit of brilliance themselves. They combined for something pretty special, that's for sure. 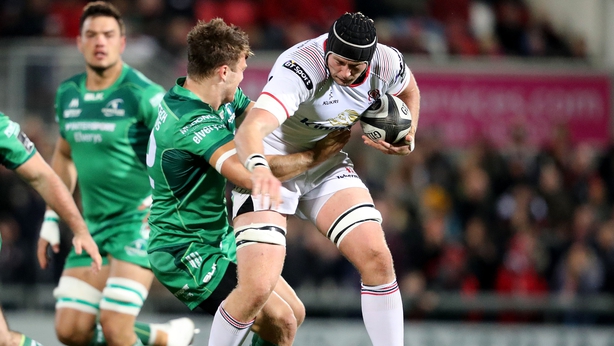 Connacht head coach Kieran Keane felt that try was "a kick in the guts" that floored his team but took heart from several aspects of the visitors' performance.

"I thought it was a terrific game... really hardfought," he said.

"Both sides were in it for most of the game but we just couldn't get over the line near the end and that was a shame for us.

"It was a massive effort. The boys got up for this game.

"We came here to win. We thought we had a really good chance. We didn't really chance our arm an awful lot in that first half but we were ahead and pretty satisfied with how we were doing most things.

"There was a sense of urgency in that second half but on that counter-attack I thought we could have scored at the other end and of course they came back, and it was almost like a 14-point try.

"I think the boys got a bit of a kick in the guts from that and didn't really recover."