Terenure moved back to the top of Division 1A following their third straight bonus point victory, scoring 25 second half points to overcome their local rivals at a packed Templeville Road. Mary's had done the double on 'Nure last season and held a 14-7 at half-time, their American full-back Tim Maupin jinking over for a 14th-minute opening try from a neat pass by Sean Kearns.

Terenure failed to capitalise on a strong break by winger Marc Hiney, before the hosts manufactured their second converted try on the half hour mark. Although flanker Hugh Kelleher was initially held up shy of the try-line, captain Ciaran Ruddock managed to power through some heavy traffic for an excellent score.

However, Terenure had a timely response before the break, their inside centre Ted O'Donoghue spotting a gap in the home defence and sprinting in under the posts for a confidence-boosting seven-pointer. Try number two followed in the 47th minute when in-form openside Niall Lalor's lung-bursting run earned him his third try of the campaign, which went unconverted.

With their tails now up, James Blaney's men were soon in the ascendancy. Their decision to turn down a kickable 52nd-minute penalty paid off when the subsequent lineout maul was finished off by hooker and captain Robbie Smyth. Out-half Mark O'Neill converted for a 19-14 lead.

With both coaches looking to their benches for fresh legs, O'Neill nailed a 35-metre penalty entering the final quarter. His 21-year-old half-back partner Schmidt, who was a scrum half in the Toulouse Espoirs squad last season, made it 29 points without reply when he dived over at the end of another pacy and power-packed move, 12 minutes from time.

Mary's showed signs of a late revival with a snappy try from winger Craig Kennedy, who broke free on the left with two minutes remaining. But Terenure closed the door on the hosts' bonus point bid as O'Neill closed out this entertaining 'Battle of the Parishes' with an injury-time penalty, bringing his own haul to 12 points.

UCD's unbeaten start to the Division 1A campaign was ended by Cork Constitution whose dead-eye kicker Tomas Quinlan guided them to an 18-5 win at Temple Hill yesterday afternoon.

The students slid off the top of the table as Con's talismanic out-half Quinlan swept six penalty goals through the posts, five of them in the opening half.

His metronomic left boot opened the scoring on the quarter hour mark, returning loosehead prop Gavin Duffy also standing out for his hard work in the loose. 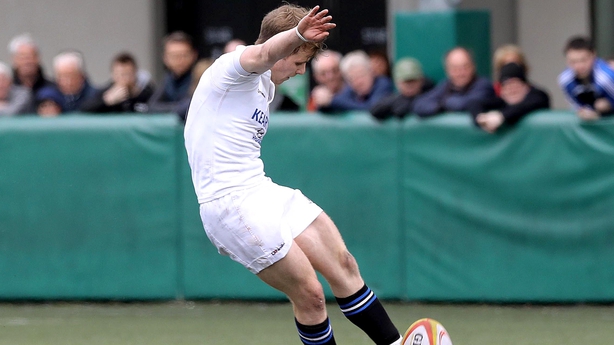 The defending champions, who lost a thrilling game at Terenure last week, continued to come away with points from visits to UCD territory. Quinlan knocked over kicks after 25, 31, 34 and 39 minutes, the closing stages of the first half marked by a terrific turnover by home hooker Max Abbott.

The visitors could not get their attack going with continuing pressure on their defence. Quinlan booted his sixth and final penalty after UCD suffered two sin-binnings, including one for a dangerous challenge by scrum half Nick Peters.

In a notable feat, Sean Duffy's introduction off the Leesiders' bench saw him make it three Duffy brothers on the field, joining his siblings Gavin and Luke.

A high tackle by scrum half Jason Higgins left Con down to 14 men in the final 10 minutes, and UCD avoided a shutout thanks to a late consolation try from Ireland Under-20 international Ciaran Frawley.

Ben Kilkenny's brace of first half tries set Young Munster on their way to a 32-24 bonus point victory over hosts Buccaneers at Dubarry Park.

The 22-year-old flanker, whose time in the Munster Academy was marred by a neck injury, led by example with two well-taken scores in this fiercely-contested tie. 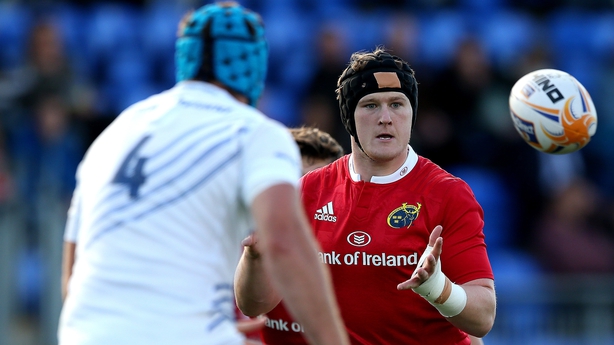 Both clubs had lost their opening two matches, so the pressure was on to deliver a winning performance and Kilkenny's double had Munsters 13-10 in front at half-time. His second effort, in the 34th minute, came from a lineout and a strong carry by Diarmaid Dee before terrific hands from Ger Slattery and Kilkenny - a nephew of Keith Wood - sent the Tipperary native over in the corner.

However, the Pirates had the better of the exchanges either side of the break, embarking on a run of three successive tries - two from lively scrum half Frankie Hopkins and the other from winger Rory O'Connor, an intercept effort for his third touchdown in two outings.

Luke Carty converted all three for a 24-13 turnaround, but Buccs struggled in the final quarter against both Lansdowne and Garryowen, and they frustratingly lost their way again as Munsters dug themselves out of a whole.

Replacement Jack Lyons' converted try got the Cookies back on track and right winger Daniel Hurley's five-pointer edged them back in front, just four minutes later.

It was still anyone's game with the scoreboard showing 25-24. The decisive try came four minutes from the end when 20-year-old Munster Academy forward Gavin Coombes, who was sprung from the visitors' bench, ripped the ball free in a tackle and galloped clear to go in under the posts.

Teenage full-back Conor Hayes, another promising young player, tapped over the conversion to complete his own seven-point haul and move Gearoid Prendergast's side beyond Buccs' reach.

An injury-hit and under-strength Dublin University side were no match for rampant Lansdowne as the students fell to an eight-try 52-12 defeat at College Park.

Lansdowne were already 33 points to the good when Trinity got on the scoreboard with a 63rd minute try. They added another one six minutes later with captain Michael Courtney, who worked tirelessly in an overrun back-line, joined on the scoresheet by Ireland Under-20 international Michael Silvester. 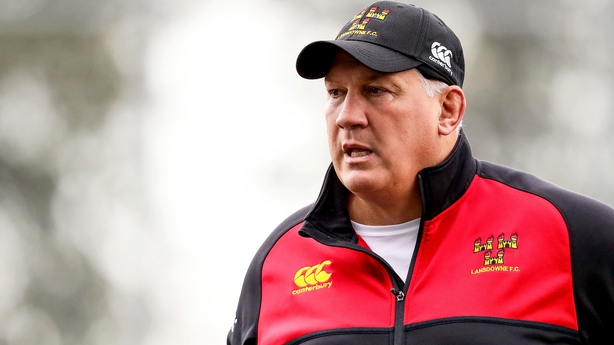 Mike Ruddock's men were in control right from the off, scoring a second minute try and their powerful pack forcing a penalty try on the quarter hour mark. It must be pleasing for Ruddock and assistant coach Mark McHugh to see the club's underage players graduating to senior club rugby and looking right at home.

One such player is centre Harry Brennan who followed up on his man-of-the-match debut performance last week against Young Munster with a two-try salvo yesterday. For a player who was lining out for Gonzaga College in the Leinster Schools Cup in 2016, it has been a dream start to his Ulster Bank League career.

Corkman Eamonn Mills continued his electric early season form with a brace from full-back, making it three tries in three starts, while Willie Earle, Daniel McEvoy and replacement back rower Jack O'Sullivan, Lansdowne's Under-20 captain in 2015/16, also touched down. Scott Deasy was successful with five conversions at the city centre venue to take his season's haul to 34 points.

Second-placed Lansdowne will host defending champions Cork Constitution in round 4 next Sunday, a day after the Leinster v Munster derby in the GUINNESS PRO14 at headquarters. Meanwhile, Tony Smeeth's Trinity, who remain bottom of the table, will have to regroup quickly for a trip to Young Munster.

Goal-kicking scrum half Neil Cronin accumulated more points on his own than an out-of-sorts Clontarf as Garryowen romped to a 51-17 win over the north Dubliners at Dooradoyle.

Cronin was in brilliant form with the boot, converting all six of Garryowen's tries, kicking three penalties and also crossing the whitewash himself for a handsome 26-point haul. Recent Munster Academy recruit Liam Coombes also chipped in with a brace of tries as the Light Blues climbed to third in the Division 1A table.

'Tarf looked a shell of the team that defeated St. Mary's in the previous round, Garryowen seizing the early initiative and not looking back as they powered into a 30-3 interval lead. 20-year-old winger Coombes was over for the first try inside eight minutes, with Cronin converting and tagging on two penalties.

A penalty from Tullamore man David Joyce, who was back in the number 10 shirt for Clontarf, closed the gap to 13-3 but Garryowen were at their free-scoring best, applying the pressure through their forwards, who included Munster hooker Mike Sherry, with Cronin kicking a penalty, converting his own try from close range and adding the extras to a Sean Rennison effort.

Although Clontarf were first out of the blocks on the restart, notching a penalty try to pull it back to 30-10, Garryowen always seemed to have the answers with the Johnston brothers, David and Bill, and fellow Munster back Sam Arnold making some key plays in both attack and defence.

Conan Doyle's charges pocketed their bonus point, adding three more converted tries to sandwich a Vakh Abdaladze effort at the other end. Coombes, Peadar Collins, who dovetailed well again with Arnold, and Hugh O'Brien-Cunningham were the scorers as Garryowen passed the half-century mark.

The six-try performance and dream result against the 2016 champions was a fitting tribute to Garryowen stalwart and former Ireland international Neville Furlong, the popular player, coach and former Garryowen underage chairman who sadly passed away on Tuesday. 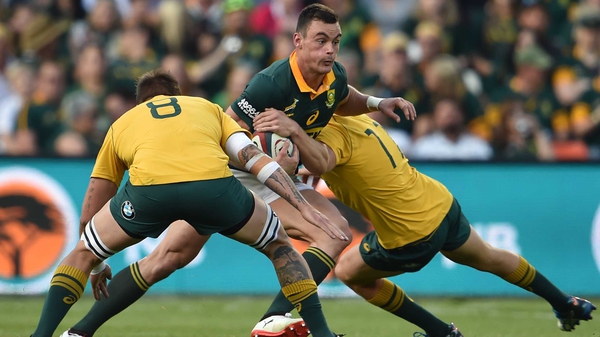