Donncha O’Callaghan's Worcester Warriors produced a strong first-half performance before wilting against Saracens and slumping to a 25-3 defeat on Friday night.

O'Callaghan played 56 minutes before being replaced by Pierce Phillips.

Peter Stringer made his first start of the season for in last week's a 24-19 defeat at Gloucester but the 38-year-old wasn't named in the panel on Friday. Worcester are rooted to the bottom of the table with a solitary losing bonus point to their name. 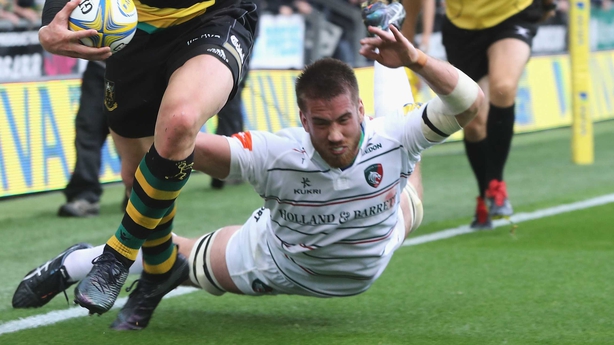 Former Leinster flanker Dominic Ryan [above] underwent a head injury assessment after half an hour of Leicester's defeat of Harlequins last week and he didn't feature in the Tigers' 20-13 win over Exeter Chiefs.

Wingers Nick Malouf and Jonny May both dotted over in an impressive home display.

The Tigers were 10-3 ahead at half-time and withstood a second-half rally from the Chiefs at Welford Road to close out the win.

Lock Paddy Butler started on the bench for Pau's 23-25 loss against Stade Francais, entering the fray for Gunther in the 54th minute.

It brought to end a run of three wins in a row for Pau; they slipped to eighth in the table.

There was frustration too for Ronan O'Gara's Racing 92, who lost 20-17 to Lyon at Stade Olympique Yves-du-Manoir.

Freddie Michalak was superb for the visitors, orchestrating a hard-earned success on the road after a late home rally was bravely held off.