Ireland promised to deliver a "tournament like no other" as they presented their bid to host the 2023 Rugby World Cup to the World Rugby Council in London.

It brought to a climax years of planning and collaboration between government, the IRFU and the GAA.

France and South Africa are the other two countries hoping to get the nod, and the successful candidate will be revealed in November.

It's been a long road; is the world in our hands?

In the year of The Gathering, then Minister for Sport Leo Varadkar confirms Ireland’s plans to bid for the 2023 Rugby World Cup as standalone hosts, using GAA and rugby stadia north and south of the border. "It would engender enormous national pride," he tells the IRB World Rugby Conference in Dublin. "Ireland has always been a unifying force. The IRFU wasn’t partitioned when the country split and rugby has always been supported by people who are Catholic and people who are Protestants and people who are neither of these." 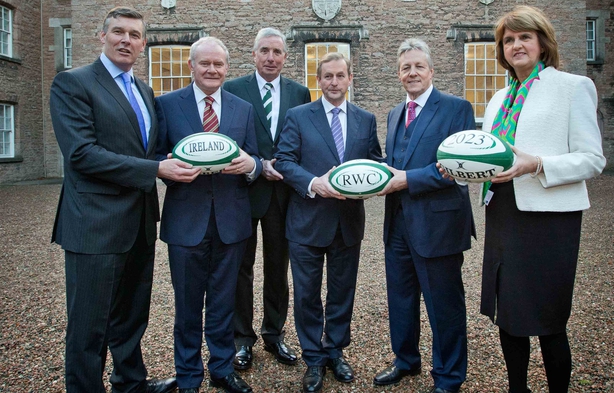 The IRFU formally announce their intention to submit a bid. The announcement is made in conjunction with the Irish Government and the Northern Ireland Executive, who both pledge their support. "Ireland will put together a winning bid that will be impossible to resist," says Taoiseach Enda Kenny. "We have the fans, the stadiums, and the accessibility to make it a World Cup to remember. Irish people love our sport. We are passionate about sport and we celebrate it."

Former Tánaiste and Ireland international Dick Spring is named bid chairman to the Oversight Board and a delegation attends a formal World Rugby workshop at Twickenham. Brian O'Driscoll is appointed to the board with the title of Bid Ambassador. France, Italy and South Africa emerge as the other countries hoping to land the tournament.

The Italians pull out of the the race. In a statement, World Rugby says: "While it is disappointing that the FIR feels unable to proceed, World Rugby fully understands the decision and hopes to see Italy join the process for future Rugby World Cup hosting." 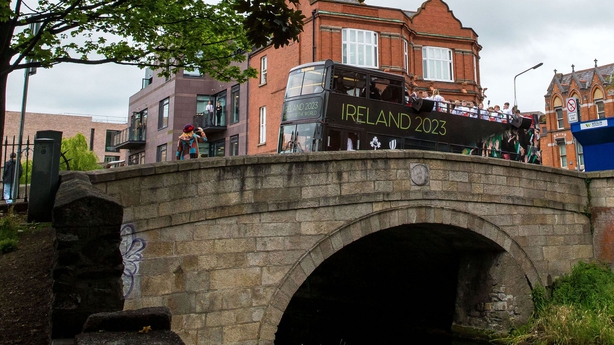 New Zealand Foreign Affairs Minister Murray McCully - who was his country's designated Minister for the Rugby World Cup in 2011 - says Ireland would be "a terrific place" to host the World Cup. Speaking alongside Charlie Flanagan, he says: "I’ll report faithfully the glowing credentials that have been outlined to me by my friend today and I will do my best to ensure that they are fully recognised by the New Zealand union in making its decision."

Brian O'Driscoll and Joe Schmidt lead an open-top bus, musicians and flag-bearers from the Aviva Stadium to World Rugby's HQ on Pemrboke Street as Ireland submit their formal bid. Bid Ambassador O'Driscoll hands in the 990-page document, which sets out the country's plans to run what IRFU chief executive Philip Browne believes would be "a tournament like no other".

The Dáil passes the Rugby World Cup 2023 Bill. Minister for Sport Shane Ross describes it as "the most energising piece of legislation" he has introduced. The emergency Bill ensures Ireland can submit a secure bid to host the competition.

Ahead of the presentation, Taoiseach Leo Varadkar feels Ireland is "rugby-crazy" and believes the #Ireland2023 bid is the best financially. pic.twitter.com/DKFJmEWSEQ

France reveals its willing to pay World Rugby €170m as a hosting fee to stage the 2023 Rugby World Cup, overpaying the standard fee by €34m. The IRFU delivers its bid presentation to the World Rugby Council in London, with contributions from U2 and Bob Geldof. Taoiseach Leo Varadkar says: "We have the infrastructure, we have fabulous stadiums, we have the best fans. Ireland is a rugby-crazy nation. We've never hosted before... and I think we have the best financial bid."