Jarrod Evans nailed the match-winning conversion in windy conditions as Cardiff Blues edged out Connacht 17-15 for their first win at the Sportsground since May 2014.

The 21-year-old replacement curled over the decisive kick following Willis Halaholo's 78th-minute try - his second of the afternoon - as the Blues bounced back from their narrow loss to Glasgow Warriors.

Falling to their third defeat in four GUINNESS PRO14 games, Connacht will be kicking themselves after Shane Delahunt's maul try, six minutes from time, had them on course for a gritty victory.

Centre Halaholo's sidestepping 37th-minute score had Cardiff leading 7-3 at half-time, with an early penalty from Craig Ronaldson the only score that wind-backed Connacht could muster.

A five-pointer from Connacht full-back Darragh Leader on the hour was swiftly followed by a Steve Shingler penalty for the visitors. Leader managed to convert Delahunt's effort, but Cardiff swooped for the win late on thanks to Halaholo's quick feet and the nerveless Evans.

With Cardiff winning the toss and electing to playing into a difficult wind, Kieran Marmion threatened first for Connacht, dinking through before his opposite number Lloyd Williams averted the danger.

Seb Davies' clever run brought the Blues into the Connacht half, Ultan Dillane pinching a turnover a few phases later before Kristian Dacey's efforts at the breakdown won a penalty in response. 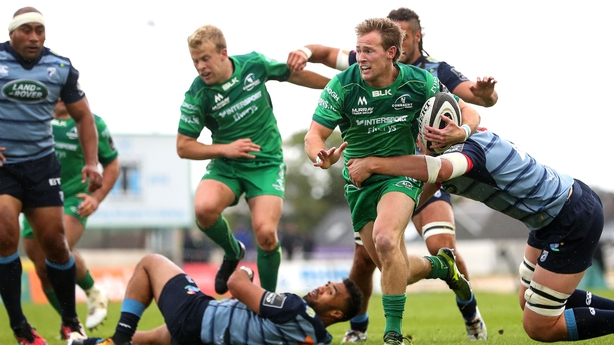 The nip-and-tuck exchanges continued as Alex Cuthbert almost broke free for the try-line from a Williams grubber. Home half-backs Deegan and Marmion hauled down the big winger.

However, it was advantage Cardiff as the interval approached. Connacht fell foul of referee Marius Mitrea's whistle, with captain John Muldoon seeing yellow for tackling Nick Williams without the ball, and then Halaholo slipped in between two forwards and stepped around Leader for a slick score under the posts.

The Blues failed to increase their lead, though, and a mammoth 30-plus phases from Connacht - with Jarrad Butler, Dillane and Stacey Ili to the fore - eventually wore down the visitors' defence for Leader to dive over in the left corner.

Crucially, Cardiff's response was swift as Josh Turnbull won a penalty on the ground and Shingler, who missed a late kick to win the match against Glasgow, split the posts for a 10-8 scoreline.

The final quarter saw Connacht get on top, obstruction ruling out a try for Tom Farrell before fellow replacement Delahunt was driven over after the province had bravely turned down a kickable penalty.

Cardiff failed to panic and having won a scrum off the restart, Halaholo carried strongly initially before an attack out to the right caught Connacht for numbers. The tireless Halaholo duly knifed through and Evans' right boot did the rest.