Leinster head coach Leo Cullen believes that the Southern Kings are moving in the right direction despite his side powering to a comprehensive victory in front of a paltry crowd in Port Elizabeth.

Cullen’s men claimed a 31-10 win in the first Guinness PRO14 game on South African soil, but only a paltry crowd turned up for the historic game. Officially the attendance was 3,011, but it appeared the number in the stadium was far less.

"These things are going to take time," explained Cullen. "It’s been a difficult back drop for the Kings, everything is set up here, they have a fantastic stadium and as the performances improve I’m sure you will get better crowds.

"It’s positive for the tournament, it’s a privilege to come to a country with such strong rich traditions in the game. And I think it will be great for our league to have a South African presence.

"It must be a really tough challenge for them to get a squad together a couple of weeks before the season starts, without any preseason effectively.

"They are making positive steps week by week with their performances, that's clear from what I saw two weeks against Scarlets to what I saw today. They are starting to look more like the team I saw in Super Rugby.

Great to get first win on tour in SA and bonus point win at that. Job done. pic.twitter.com/JinRnqK8DP

"They had a lot of threats across the park and some strong carriers aswell, I thought our guys scrambled well and we were fortunate to keep them out at times."

Leinster captain Isa Nacewa and Jamison Gibson-Park were denied access to the country after changes to visa rules earlier this year. In the absence of Nacewa, Rhys Ruddock captained the side. 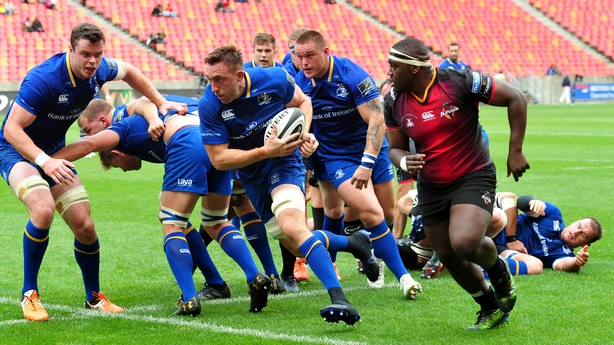 "When there is a big huge stadium and not a huge amount of people you just need to bring your own energy," said Ruddock.

"And I thought the energy they brought in the first half was greater than ours, that left us second best a lot of the time.

"I thought we regrouped at half-time and the intent and energy we brought allowed us to get a foothold in the game and we grew from there."

Leinster will play the Cheetahs next week and Cullen revealed that both Nacewa and Gibson-Park will be in the country and available for selection for the game.