Coach Rory Duncan remained upbeat, despite seeing the Cheetahs lose 42-19 and conceding six tries to Ulster on their introduction to the new era of the Guinness Pro14.

It was announced last month that South African franchises Toyota Cheetahs and the Southern Kings would see the former Pro12 increased by two teams in time for the 2017-18 season, with the competition split into two conferences of seven.

Each conference is made up of two Welsh and two Irish teams, with one representative each from Scotland, Italy and South Africa.

'It's great to be part of this competition.'

"It was an experience getting the first game out of the way," Duncan said.

"Obviously the end result was not quite what we wanted. Still it's great to be part of this competition."

Duncan bemoaned the Cheetahs' discipline, with Henco Venter and Johan Coetzee yellow-carded in either half, although the former's punishment was the most costly, with Ulster racking up 19 unanswered points to lead 27-14 at half-time.

"We conceded some tries during the yellow card period of time which put us under pressure and obviously it's not ideal playing with 14 men for 20 minutes in the game, but that's also part of the game," Duncan said.

The Cheetah's coach also refused to accept that battling on two fronts - the rest of the franchise's squad are currently involved in the Currie Cup back in South Africa - will have an effect on the South African side's hopes for the Pro14. 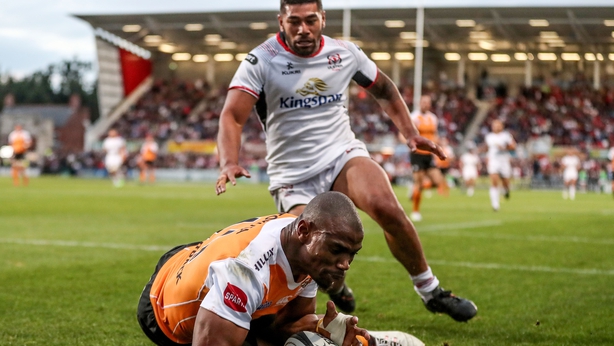 He added: "It won't make much of an impact, but just means we have more players available back home to come into the squad.

"I think the impact will be from the guys who come back in from injury.

"I think Ulster played really well so hats off to them, they had a really good game."

Ulster director of rugby Les Kiss was relieved to have got the season off to the right start, but still urged caution.

"There was some nice stuff that came through which we've been trying to build on, but there's a fair way to go," said Kiss.

"To be at Kingspan and show what it means is important and I think the other important fact for us is that we understand that we need to be a better team week in, week out.

"You saw what the Cheetahs could do at times and when you talk about world class they had some world-class finishers and when you gave them scraps they showed they could stay in the hunt and they hurt us a few times.

"I'm happy where it is at the moment, but it's only one game in the season."