With Kiwi duo Marty Banks and Whetu Douglas on board, the Italians were quietly confident of troubling their hosts in Cork, but Munster blew them away in the first half thanks to tries from Jean Kleyn, captain Tyler Bleyendaal and the fleet-footed back-three of Darren Sweetnam, Alex Wootton and Andrew Conway.

Five tries in five visits to the 22 opened up a 27-3 half-time lead, and while the scoring chances dried up for man-of-the-match Conway and company, Kleyn managed to complete his brace in the 48th minute following Francesco Minto's sin-binning.

The only sour note for Munster was a serious looking knee injury sustained by replacement centre Dan Goggin.

The impending departures of Rassie Erasmus and Jacques Nienaber back to South Africa - Erasmus is taking up the director of rugby role with SA Rugby - will undoubtedly overshadow the early part of Munster's season, but the players are not letting it distract them on the pitch.

Fourteen weeks on from their PRO12 final humbling at the hands of Scarlets, the Irish province absorbed some early pressure before hitting the front in the eighth minute. Debutant Chris Farrell carried strongly before second row Kleyn stretched over to the right of the posts with Bleyendaal converting.

New fly-half Banks opened the Italians' account with a straightforward 19th-minute penalty, but his opposite number Bleyendaal was having a big influence on proceedings behind an industrious pack. The visitors were caught too narrow as winger Sweetnam was fed in space and he stepped inside two tackles to touch down wide on the right. 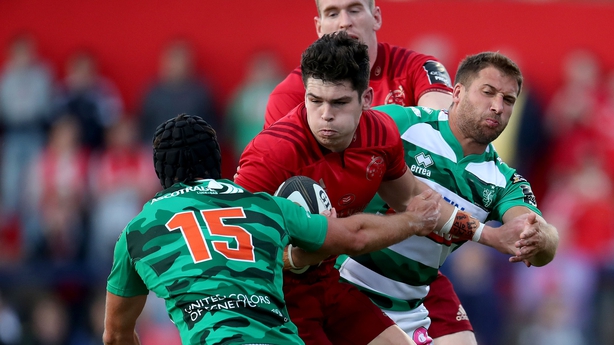 Bleyendaal's place-kicking was the only part of his game which let him down, with three more missed conversions before the interval.

Nonetheless, Munster had the bonus point safely tucked away on the half-hour, Conway catching a kick and immediately hurtling back into the Italians' half, with some crisp handling releasing Wootton to raid over in the left corner.

The home side added a fifth try before the half-time whistle, as Jaco Taute and Sweetnam combined near halfway and the supporting Conway burst onto a pass, evading two defenders initially and turning on the afterburners to go over unopposed for a terrific 34th-minute try.

Munster resumed on the offensive with Conway having a try ruled out for a knock-on, before one too many penalties saw Benetton flanker Minto yellow carded for offside. The numerical advantage quickly translated into a second close range try from South African Kleyn.

A game-but-limited Benetton side toiled away for little reward despite a better share of possession near the hour mark.

Kieran Crowley's men had enough possession and territory to build for a consolation try, however Munster's scrambling defence kept them out with Sean O'Connor - another of the province's up-and-coming forwards - securing a timely turnover with a rip in the tackle.

Munster went closest to a late score but replacement Ian Keatley was tackled short of the try-line.