Hosts Ireland got their campaign off to the perfect start as they edged out a two-point victory over resilient Australia in their opening game of the Women’s Rugby World Cup.

In the basking sunshine at UCD Bowl, the sides shared six tries, with Ireland’s greater accuracy at the kicking tee helping Tom Tierney’s side take a giant step towards qualification from Pool C.

A missed conversion was the difference between the sides at the interval as Ireland led 7-5, while the second half was even tighter as both sides scored two further tries in a highly competitive contest.

Nip-and-tuck throughout, Ireland’s superiority at crucial times in the line-out and scrum laid the foundation for a memorable victory in front of 3,500 spectators.

While the two games played at the venue earlier in the day witnessed tries within the opening minutes, scores were at a premium as the sides ranked fifth and sixth in the world settled to the task.

Fifteen minutes in as the partisan crowd awaited the first score, the tannoy announcer revealed that Canada had defeated Hong Kong by a whopping 98 points at Billings Park. It was a different type of game on the other side of the university campus.

With early dominance at set-piece – a scrum won against the head set the tone - Tierney’s side slowly got a foothold in the contest after the Wallaroos enjoyed the early share of possession, keen to run the ball at every opportunity.

Big carries from Sene Naoupu and prop Lindsay Peat lifted the crowd and a powerful rolling maul edged Ireland to within the five metre line. Play was spread wide for the charging Ali Miller, but the ball failed to go to hand with the winger bearing down on the try line.

Minutes later and the pressure told. 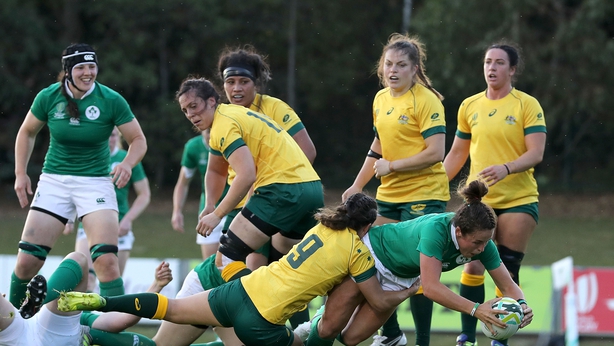 The hosts again took the game to their opponents up front. The maul was the catalyst, with Peat breaking off to charge for the line. She was eventually halted by two defenders, but scrum-half Larissa Muldoon burrowed over from close range.

Twenty minutes gone at the Bowl and the crowd was in full voice as the hosts took a seven-point lead.

The response however was swift. The Australians are the 7s Olympic champions and showed their attacking verve just before the half-hour mark to roar back into the contest.

Trilleen Pomare marshalled her team into Irish territory from number 10 and from a quick line-out, her half-back partner Katrina Barker spotted space out wide.

With Ireland not alert sufficiently to the danger, the skip pass found Mahalia Murphy lurking on the wing.

The debutant still had work to do, but cut back in on her right, side-stepped Eimear Considine and raced in for a well-worked score.

The Aussies exerted the greater attacking pressure up until half-time, but couldn’t add to their tally as a resolute Irish defence held firm to lead 7-5 at the interval.

The opening 10 minutes of the second half was attritional, the majority played in the middle third as both sides looked desperately to find an opening. 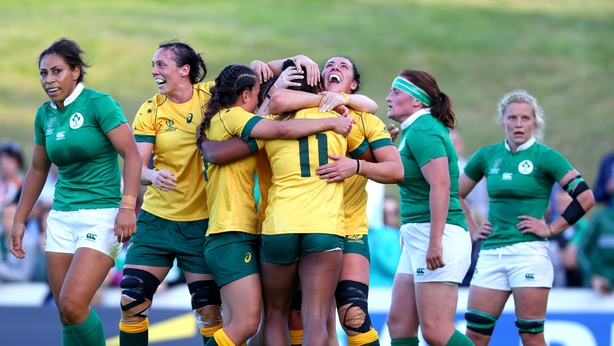 It came in the 56th minute. This time Australia got the advantage in the scrum when substitute Ciara O’Connor was pinged and after turning down the kick at posts, were rewarded when captain Shannon Parry drove over to put the Australians into the lead for the first time. Crucially, full-back Samantha Treherne spurned her second conversion attempt.

A bristling Irish ensured it lasted for all of two minutes.

Ali Miller made headway on the left wing and Ireland carefully recycled as the forwards took it upon themselves to engineer their second try.

Eventually it was Ciara Griffin, only on the pitch five minutes after replacing Heather O’Brien, who came up from under the pile of bodies under the post and Stapleton converted to edge Ireland ahead 14-10.

Miller menaced with intent on the left wing throughout and with the Wallaroos’ defence creaking, the third try was inevitable.

With continued pressure, hooker Cliodhna Moloney bulldozed her way towards the line. The ball was taken on by Spence in the corner and after deliberation from the TMO, the decision went Ireland’s way much to the delight of the packed stadium.

If the fans thought that was the insurance score, the Australians had other ideas and went straight down the field to ensure a nervy finish.

Four Irish defenders couldn’t prevent Hilisha Samao from crossing the whitewash after some eye-catching off-loading in the build-up.

The vocal home support roared Tierney’s team home for the closing stages and ensured a satisfying start to the competition.

Next up for Ireland is a date with the perceived weakest side in the pool, Japan, on Sunday afternoon.