Robbie Henshaw will be sidelined for the start of Leinster's season and is in danger of missing his Ireland's November test series after the full extent of his pectoral muscle injury has been revealed.

The Athlone native was injured during the Lions 31-31 draw with the Hurricanes and left the stadium with his arm in a sling.

It was initially thought that Henshaw had suffered a shoulder injury but is was later discovered that he had suffered a major pectoral muscle injury and that he will be out of action for up to four months.

Lions medical chief Dr Eanna Falvey revealed the Henshaw had torn the muscle off the bone and said: "The muscle needs to be reattached, and that's usually about a 16-week recovery.

"He may do slightly better, but that's probably what we're looking at."

Ireland will take on South Africa, Argentina and Fiji in the November series and while Henshaw may have recovered from the injury by then, he may still be struggling for match fitness. 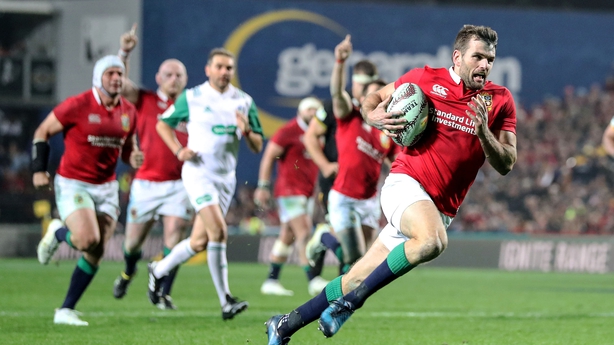 Elsewhere Dr Falvey revealed there is no clear return date for Jared Payne after he was stood down due to suffering from migraines.

The Ireland centre was withdrawn from the Lions' clash against the Hurricanes after complaining of headaches, and now faces further tests as the problem continues to linger.

The 31-year-old progressed through a raft of tests but it's still unclear as to when he will return.

"He's actually suffering from migraine," Dr Falvey said of Payne, who has remained in Wellington after the Lions' second Test victory over New Zealand for further specialist testing.

"He had a bang in the Chiefs game (on June 20), but he was fully cleared from concussion.

"But he's been struggling with migraines and that's an independent process since then."

Payne missed the Lions' 31-31 draw against Hurricanes draw, and was then not involved in Saturday's 24-21 triumph over the All Blacks.

The Ulster flyer has stayed in Wellington while the Lions squad have moved on to Queenstown.
The tourists will face New Zealand in the third and decisive Test at Eden Park on Saturday.

"Jared's slightly more difficult," Dr Falvey said of Payne's recovery situation. "Thankfully all his tests have been good. He's suffering from migraine symptoms at the moment.

"The specialist is quite happy with him. He'll have a couple more minor tests, and that will give us more idea. But while he still has a headache, he won't be training."