New Zealand scrum-half Aaron Smith says that games like next Saturday's Test series decider against the British and Irish Lions are "what you play rugby for".

The Lions rocked world champions New Zealand two days ago, winning the second Test in Wellington to set up an Eden Park showdown.

Smith and company have now moved to their familiar central Auckland base, from where head coach Steve Hansen will aim to plot the Lions' downfall and avoid New Zealand suffering successive Test defeats for a first time since 2011.

"It's what you play rugby for, these big games," Smith said. "I could play today. I am ready to go.

"But it is about building the week and the whole experience. These are the ones you remember.

"It's in our hands about what we can do this Saturday. We were here a couple of weeks ago (for the first Test), this hotel is a second home to us. Auckland always puts on a good show, and it is just about building the week.

"It's 1-1. We can't look back. We have got to look forward and turn up with the best attitude we can."

The All Blacks will be without star centre Sonny Bill Williams following his red card in Wellington and subsequent four-week ban, with Malakai Fekitoa likely to feature in the match-day squad following his call-up on Sunday.

"He is a very physical player, very confrontational," Smith added, of the Highlanders player.

"He will go hard, do his job really well and also probably if he gets an opportunity, maybe there is a bit of a no-fear attitude coming in. He knows what he has to do." 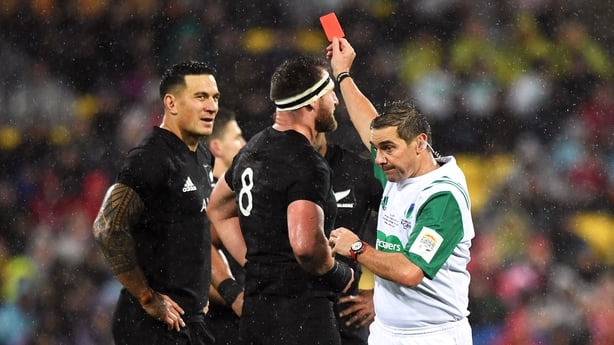 Despite going down to 14 men with 55 minutes left, New Zealand still had their chances against the Lions before conceding a 24-21 second Test defeat.

And Smith knows it is vital they exploit any opportunities that come their way if they want to prevent a first series loss against the Lions since 1971.

Lions head coach Warren Gatland has said he did not think the All Blacks "stressed" his team in terms of their attack, and Smith said: "After Saturday's effort, you would have to say exactly that.

"We had our moments. They fronted up in defence, closed up that tight space and we didn't react really well.

"In Test one, they wanted to fill the field and try to defend us across the park, and we went through them.

"In Test two, I think the conditions suited the kind of game they wanted to play. They wanted to make it a real struggle at the ruck - they definitely had an emphasis on that.

"We didn't help ourselves. We didn't attack where they weren't, and that is something we are going to fix this week.

"I thought all the forwards' work, and the way we built ourselves into the game after half-time, we'd done enough. But at this level, it is only a couple of mistakes, and we made some critical errors at the end and they were good enough to take them.

"There were opportunities there. Those opportunities will present themselves next Saturday, and we've got to be good enough to see them and take them."