Rory Best insists that the pressure is on the Lions midweek side to put in a big performance against the Hurricanes to lift morale in camp ahead of the second test against New Zealand.

Best will once again captain the side that faces the Super Rugby champions in Wellington on Tuesday morning, and the Ulster hooker knows that the importance of the game goes beyond securing a result in what will the last chance for many of the tourists to pull on the red jersey with just the final two test matches to come.

"We've been preparing well, we trained Saturday and then got out to support the boys on Saturday evening, and we're in a pretty good place at the minute," Best told RTÉ Sport.

"We're getting ready for Tuesday, and it's something we've talked about all tour, that the next game is the most important one.

"I suppose it's a bit of role reversal from earlier in the tour, so it's important for the whole squad that we get out and produce a performance, for morale as much as anything." 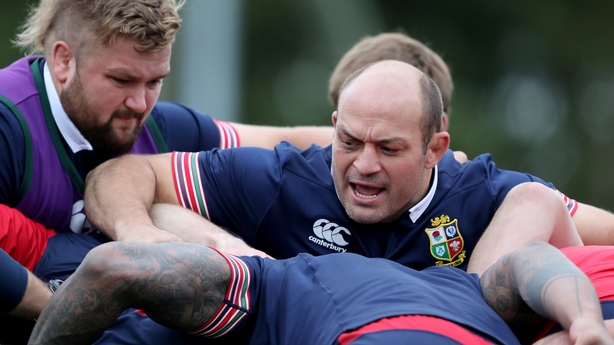 With the Lions smarting from their 30-15 defeat in the first test in Auckland on Saturday, head coach Warren Gatland may look to promote new faces to his panel for the second clash with the All Blacks, and Best knows there is the potential for involvement this weekend as long as he remains focused on the immediate job in hand.

"It's just really important that we treat this for what it is, a very important game for the squad," the Ireland skipper said.

"Obviously everyone knew the bigger picture was the first test selection but that's been and gone now so now we've a chance as a a squad to put our hand up for selection for the second test.

"It's not something the coaches have been backward about saying, that if you play well enough and put your hand up high enough, that you have a chance of being selected. That's all you can ask for as a player.

"We've got make sure we put on a really good collective performance and hope people within that collective stand out. That's what you want and that's what having a big squad and a really competitive squad is about."

We'll have a live blog on Tuesday morning on RTE.ie and the News Now App and live radio commentary on Radio 1 Extra and RTÉ.ie on the Hurricanes v Lions (kick-off 8.35am).