Steve Hansen took a swipe at the British and Irish Lions' bid to become the world's best forward pack after the All Blacks' muscular first Test victory.

New Zealand strangled the Lions at the scrum and lineout, demolishing the tourists' plans to dominate the tight exchanges in their 30-15 win at Auckland's Eden Park.

Assistant coach Steve Borthwick had challenged the Lions to become the best forward pack on the planet to stand a chance against the world champion All Blacks.

Boss Warren Gatland wanted the Lions to "suffocate" New Zealand, but in the end the tourists were comprehensively bested in the physicality stakes.

"I always find it amusing when people tell us they are going to beat us up in the tight five," said Hansen.

"I thought our tight-five were very, very good. If the tight five do the job everyone else can play.

"Tonight's Test was always going to be won in the tight five. We won that battle, but that doesn't guarantee that will happen next week. 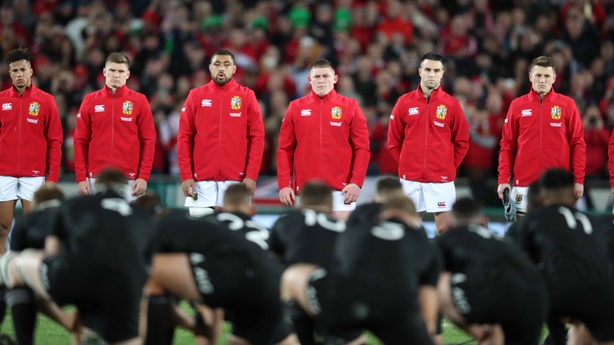 "We've got to be extremely proud of what they did. You don't become the number one side in the world without having a quality tight five."

Full debutant Rieko Ioane bagged a try brace with hooker Codie Taylor steaming into the corner for another score, as the All Blacks subdued the Lions.

Sean O'Brien capped an 80-metre break for a stunning Lions score that All Blacks boss Hansen dubbed "one of the best Test tries I've ever seen".

Rhys Webb also crossed at the death for the tourists, who produced some sparkling counter-attacking play - but lost out as their strength up front deserted them.

The first Test became a role reversal in styles then, the All Blacks rejecting their fluent offloading game in a bid to get the job done - and the Lions conjuring some serious flair, but without the grunt work required for a win.

All Blacks full-back Ben Smith failed a Head Injury Assessment, while Ryan Crotty picked up a hamstring injury and could miss the rest of the series.

The Lions will now face the Hurricanes in Wellington on Tuesday before next weekend's second Test at the Westpac Stadium.