Ireland signed off on their summer tour with a 35-13 victory over Japan at Ajinomoto Stadium in Tokyo.

Tries from Garry Ringrose, Josh van der Flier, Kieran Marmion and Rhys Ruddock had Ireland cruising at 28-8 at the break, with substitute flanker Sean Reidy barging over for a late try in the dying minutes.

Japan responded with tries from Kotaro Matsushima and Akihito Yamada and three points from the boot of fly-half Jumpei Ogura in a much-improved display.

Joe Schmidt's youthful squad, with 11 regulars away on British and Irish Lions duty in New Zealand, had previously encountered little resistance on their tour of the United States and Japan, storming past the Eagles 55-19 in New Jersey before thrashing the Brave Blossoms 50-22 in Shizuoka.

They were finally given a proper examination in their third and final tour match by Japan, whom they will meet again in Pool A at the 2019 World Cup.

Ireland made the perfect start when Ringrose seized on Amanaki Mafi's wayward pass in midfield and raced away from 50 metres out to register the first try of the afternoon. Jackson fired over the conversion to give the tourists an early 7-0 lead.

Japan's line-speed and aggression in defence was noticeably improved from last weekend's abject display at Ecopa Stadium, but Ireland's power game and quick recycling was again proving too much.

After 12 phases, quick hands from Devin Toner, Jackson and Luke Marshall released Van der Flier, who showed great strength to touch down in the corner. Jackson added the extras.

Japan finally got a foothold in the game after 14 minutes when referee JP Doyle penalised Ireland for straying offside. Ogura made no mistake with the resulting penalty to get the hosts into the game. 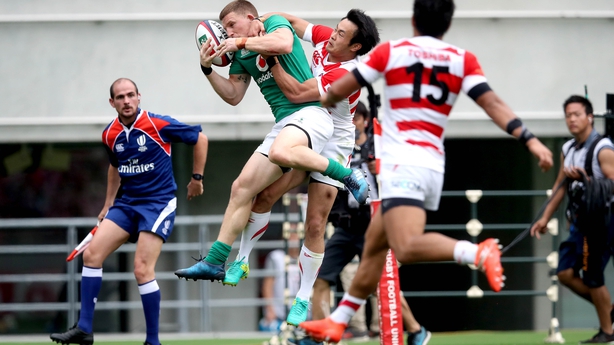 Ireland's array of ball carries, spearheaded by the Leinster trio of Cian Healy, Jack Conan and Ruddock, had the home side on the back foot throughout the first half.

When Conan was held up just short of the line, after another powerful charge, scrum-half Marmion sniped on the edge of the ruck to score his side's third try. Jackson converted again to make it 21-3.

The Brave Blossoms came roaring back into the contest thanks to a powerful drive by lock Uwe Helu, who powered through Jackson's high tackle. The Japan lock's ferocious carry laid the platform for outside centre Matsushima, who showed great feet to cross in the corner. Ogura pushed the touchline conversion just wide.

That proved to be temporary respite, however, as Ireland charged back with their fourth try in the 31st minute. A powerful scrum allowed the impressive Conan to carry off the base.

From the next ruck, skipper Ruddock powered over from close range. Jackson continued his fine form from the kicking tee to stretch his side's lead to 20 points.

Ireland dominated possession after the break but were met be a red and white wall of Japanese defenders time and again with captain Michael Leitch and veteran lock Luke Thompson putting in some huge hits around the fringes of the ruck.

And it was the home side who struck first in the second half as flying wing Yamada crossed in the corner to cut Ireland's lead to 28-13.

Both sides emptied the benches on the hour mark as the heat and humidity began to take its toll.

Newly introduced young forwards James Ryan and Andrew Porter provided Ireland with a much-needed energy boost, as the visitors took the game to Japan in the final quarter, but struggled to break down a committed defensive effort from Jamie Joseph's side.

The Irish finished with a flourish as substitute flanker Reidy crashed over thanks to deft line and offload from replacement hooker Niall Scannell.