Gatland revealed last weekend that the Lions had already raised the issue of off-the-ball "blocking" with officials, and said he planned to speak to Test referee Peyper to further discuss the tourists' concerns ahead of the Eden Park opener.

Hansen, speaking at a press conference after announcing his team on Thursday, indicated Gatland had been wrong to "apply pressure" on the official by talking about such matters openly.

"The referee's got the hardest job in the world, I reckon," the All Blacks boss said.

"With the blocking, the rule says that as long as you don't change your direction of running, you are entitled to run back to help your team-mate, and that's the key, isn't it?

"There is no point trying to bully the referees publicly in the media."

"Turn around and run back, and don't change your line. If your line is the same, then you are not blocking, what you are doing is just running back to help your team-mate.

"But if you run five metres to get in front of someone, that's dopey, that's dumb.

"We just want the ref to referee the rules the way they said they were going to, and be consistent about it. Will there be mistakes? Yes, there will be because they are humans, just like both teams will make mistakes themselves.

"There is no point trying to bully the referees publicly in the media. We have a moment to meet them (on Friday) and we will talk about things we need to talk about in private. And he will give his interpretation of what he wants, and then it is up to us to go and deliver that." 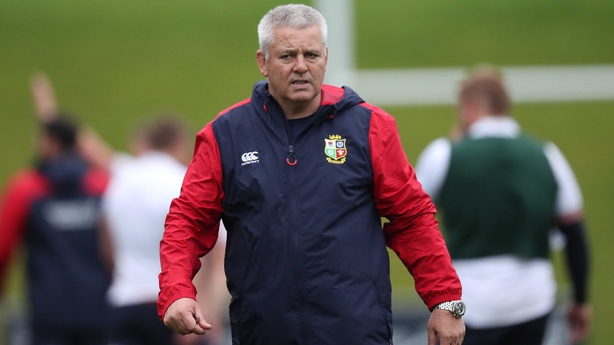 Asked what he would like to talk to Peyper about specifically, Hansen said: "Well, if I talk to you (the media) about it, then I am applying pressure to him in the media, and that's sort of like bullying him, and I don't want to do that.

"So I will just quietly talk to him on Friday, and certainly there are areas of the game that we will talk about."

Hansen, meanwhile, dismissed Gatland's suggestion that he might be "a little bit worried" heading into the three-match series.

"You guys that know me know I will tell you all the time that worry is a wasted emotion," he said.

"And if it hasn't happened, you plan so you don't have to worry about it."

"You guys that know me know I will tell you all the time that worry is a wasted emotion."

Hansen masterminded New Zealand's World Cup triumph in 2015, but he sees the three-game Lions series as "right up there" in terms of coaching challenges.

"I was thinking about that earlier (on Thursday), that very thing, and it's right up there," he said.

"The World Cup is a knockout tournament, and the difference with the Lions is you get three goes. If you stuff the first one up, you get another one. And it's the same for both teams, isn't it?

"It's exciting, and you can feel the enthusiasm and the real hunger in the hotel with the players.

"So then it means the opposition have to be, too, and they've selected a side that is capable of playing a different type of game than we play. And that in itself is intriguing and very interesting to see the result once it has all been played out."