The Lions were awarded a penalty try, which resulted in Brown receiving his 10-minute sojourn on the sidelines, then Nowell and Jared Payne both touched down while he was still off the field as the visitors' sustained pressure finally paid off.

Flyhalf Dan Biggar added three conversions and two penalties for the visitors, who now head to Auckland to face the All Blacks in the first match of the three-test series on June 24.

Captain Stephen Donald slotted two first half penalties for the Chiefs, who were under constant pressure from the visitors, who retained the ball for long periods and smothered any attack.

The Lions' midweek men hit back to winning ways after galling defeats to the Blues and Highlanders, but did so against a Chiefs line-up shorn of 10 frontline stars - six of them All Blacks.

Courtney Lawes impressed at lock, especially in shaking off a nasty-looking clash of heads with Joe Marler.

The Northampton second row would be an option off the bench for the Test if required, though is likely to miss out with Maro Itoje, George Kruis and Alun Wyn Jones the three premier locks.

Lawes set the Lions rolling with a smart lineout steal, before the tourists ploughed through 20 phases without breaking the Chiefs' defence.

Dan Biggar's penalty put the Lions on the board, but then Marler lost his head and wiped out Nepo Laulala with an off-the-ball no-arms high shot.

The Harlequin was walking off the pitch before referee Jerome Garces could even award the yellow card.

The Chiefs put the penalty to the corner, only for CJ Stander to force a choke tackle at the maul.

Biggar and Stephen Donald traded penalties for the Lions to lead 6-3 on 20 minutes, and then Nowell punched home for an opportunist's finish.

And when the Lions drove through the middle, Nowell sniped home from the base of the ruck. 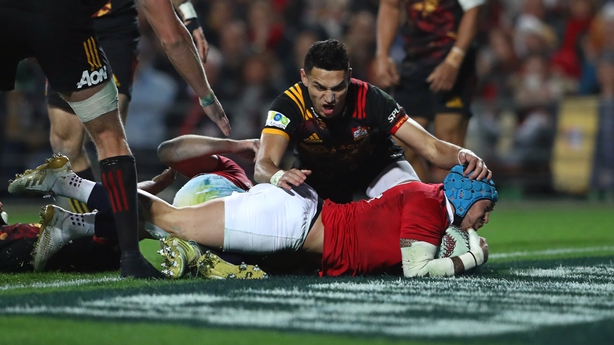 The Lions punted a kickable penalty to the corner only to botch the lineout maul, then Biggar was lucky to avoid a yellow card for a high swinging-arm shot on Chiefs number eight Tom Sanders.

Donald's second penalty left the Lions leading 13-6 at the end of a fractious, error-strewn half.

The officials penalised Johnny Fa'auli for blocking after the break, in news that will please Gatland. The Lions believe the New Zealand teams have been getting away with illegal obstructions across the course of the tour.

Gatland has raised the issue publicly in urging referees to clamp down ahead of the Test series, and here was the first evidence his words could pay dividend.

England lock Lawes came off worst from a nasty-looking clash of heads with team-mate Marler, and departed for a Head Injury Assessment (HIA).

Mitch Brown collapsed a Lions maul just metres out, conceding a penalty try as well as being sin-binned.

Lawes returned after just five minutes off the field, with Jones heading back to the bench as the Wales lock was protected for Saturday's Test match.

The Lions then cut loose for the first time, Nowell capping a flowing move with an impressive finish.
Justin Tipuric fed Daly who raced down the left, Payne and Robbie Henshaw took the move on in the Chiefs' 22, and a fine pass from Iain Henderson handed Nowell the chance to strike.

The Exeter wing seized on a doglegged Chiefs defensive line, to scythe home and seal the Lions' win.
Daly was immediately replaced, in a potentially telling substitution. The England man impressed in a busy showing and should now make Saturday's Test 23.

The Chiefs then leaked another cheap score as Williams raced through a ragged home defence, before Payne coasted over the whitewash.