Rory O'Loughlin was relieved to win his first cap during Ireland's 50-22 demolition of Japan on Saturday.

The Leinster utility back, who is equally adept at centre or wing, was one of eight uncapped rookies taken on Ireland's tour of the United States and Japan and head coach Joe Schmidt hinted beforehand that some of the squad may not see game time.

New Zealand have taken 'apprentices' on tour in the past with Jordie Barrett travelling as an unused squad member during their November series last year, and Schmidt suggested that Ireland may follow suit this month.

But that was not O'Loughlin's fate as he replaced Paddy Jackson on the hour mark against Japan at Ecopa Stadium in Shizuoka, and the 23-year-old was understandably thrilled to see some action.

"Yeah that was one of the first things he (Schmidt) said to us: a Test cap is not guaranteed, it's hard work to get one," he said.

"Players have been in camps before, Robbie Henshaw was in camp (in the past) and didn't get one and was just there to learn.

"So when he said that there was a bit of fear that maybe I wouldn't get a shot this tour, but at the same time I just took stuff on board in training and tried to show him that I was capable, and push for a spot in the 23 and get capped. And thankfully I did!"

O'Loughlin was rewarded for his superb form for Leinster this season, where he made 21 appearances and scored 10 tries for Leo Cullen's side. 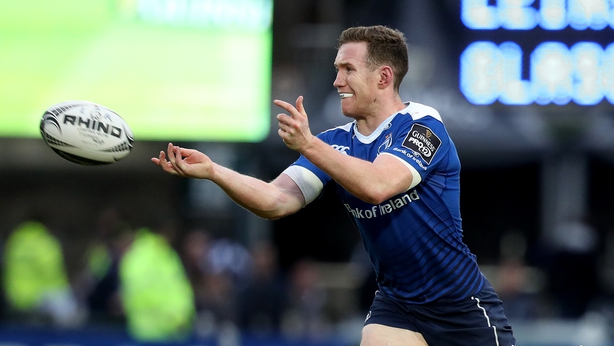 Having only made his senior debut for Leinster against Treviso back in September, O'Loughlin's rise has been rapid and the exciting back has been thriving under the tutelage of Schmidt in recent weeks.

"You have to learn very quickly and that's the main thing: to show him that you can adapt to a new way of playing, a new system, and fit in seamlessly. It's definitely quite different to the way Leinster play," he said.

"Certain things, different styles, in both defence and attack are different so you kind of find yourself in the first few sessions with old habits that I'd be used to from Leinster - you have to snap out of that pretty quickly or you'd hear all about it in the review if you keep doing the same thing over and over."

With a 20-minute cameo under his belt. O'Loughlin will be targeting a strong end to Ireland's summer tour as Schmidt's men gear up for their rematch against Japan in Tokyo on Saturday.

"I was both nervous and excited (the night before the game) but once you're on the sideline and warming up and you're seeing how the game is panning out kind of allows you settle in to it,' added O'Loughlin.

"I was told about five minutes before I came on that I'd be on for the last 20. I got myself prepared and was actually calm enough coming on and ready to go."

The Ireland squad arrived in Tokyo on Saturday night by bullet train following their seven-try victory in Hamamatsu.

The squad went through a light session on Monday but will have their first full-contact session of the week on Tuesday.

Meanwhile, Japan will be without midfielder William Tupou for Saturday's clash after the Brave Blossoms centre was handed a three-match ban for a dangerous tackle on Ireland lock Devin Toner during the first Test.