Lions boss Warren Gatland aimed a jovial jibe at New Zealand counterpart Steve Hansen as he returned to home turf for Tuesday's game against the Chiefs.

Hamilton native Gatland coached former All Blacks playmaker Stephen Donald in his early days at Waikato, and the two will go head to head on Tuesday, a game in which five Ireland players will start.

The 53-year-old warned his players not to let Donald sell them a dummy on Tuesday, before congratulating the 2011 World Cup winner on his engagement.

Gatland joked "I do have my sources" when quizzed on how he knew of Donald's impending nuptials - in a clear reference to Hansen refusing to reveal how he knew the Lions were calling up six players as early as last Thursday.

"I was lucky enough to coach Steve (Donald) for a few years," Gatland said of the ex-New Zealand fly-half.

"New Zealanders either loved him or loathed him really, but he's a fantastic individual, a great team man and it's nice to see him play.

"Twelve months ago when we were here with Wales I said, 'Whatever you do, don't take a dummy from Stephen Donald', and the first thing he did was throw a dummy and score.

"So that will be the message again for Tuesday.

"Stephen's an icon around here, and it's nice to see. I heard he just got engaged as well - I'd like to congratulate him on that.

"I think he was out white-baiting and the ring was offered out the back of the Ute, so that's typical Stephen Donald."

When asked how he managed to have advance knowledge of Donald's big news, Gatland joked: "Well, I do have my sources of information!"

Hansen had offered a dig at the Lions by claiming to reveal their plans to add six players in a New Zealand press conference last week.

The Lions had hatched that plan back in September, however, and have since made good on those additions - who will all sit on the bench against the Chiefs.

Wales quartet Cory Hill, Kristian Dacey, Gareth Davies and Tomas Francis have made the short trip from Auckland to link up with the Lions, while Scotland's Allan Dell and Finn Russell have jetted in from Australia.

Gatland, who coached Waikato from 2005 to 2007, was delighted to be back on his old stomping ground and hugely appreciates the support of the region.

"If you cut me open I probably bleed red, yellow and black; I'm very proud of my roots," Gatland said.

"It's a great place to have grown up. Waikato people are incredibly loyal. The amount of support I've had is amazing. We experienced that in the 2011 World Cup.

"It's nice to be back, catch up with some friends. Really looking forward to a great occasion on Tuesday night, a fantastic atmosphere and a proper rugby ground as well."

Meanwhile, Gatland has insisted that captain Sam Warburton remains under pressure to force his way into the first Test line-up.

Tour skipper Warburton is fit but has been left out of the Lions' 23 for Tuesday's Chiefs clash in Hamilton, raising hopes for the Wales flanker to squeeze into the Test squad after ankle trouble.

But head coach Gatland has again reiterated his huge admiration for the back-row unit of Peter O'Mahony, Sean O'Brien and Taulupe Faletau, that helped the Lions "squeeze the life" out of the Maori in Saturday's 32-10 triumph.

Warburton continues to chase full match sharpness, and could well take a seat on the bench for Saturday's first All Blacks Test in Auckland.

"There's no doubt that there's some pressure on certain players and certain combinations have gone well," said Gatland, when quizzed on Warburton's situation.

"A lot of those guys who played against the Crusaders did exceptionally well, and last night's performance against the Maori, we dominated territory and possession, and we squeezed the life out them, an unbelievably talented backline that just went nowhere.

"For Sam, look, we were hoping he was going to be part of the 23 against the Crusaders. Unfortunately he rolled his ankle a little bit so hadn't recovered in time.

"So he had time against the Highlanders and we were able to give him time last night. So there will be some tough debates and discussions to have on the final make-up of what the back-row is going to be for Saturday." 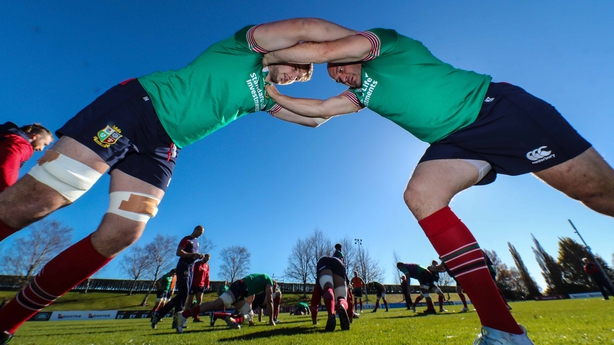 Gatland claimed he was "always confident" Owen Farrell would be fit for the first Test, despite the England fly-half still battling a thigh issue.

Leigh Halfpenny must complete the head-injury protocols to start at full-back against New Zealand in Auckland on Saturday - so Liam Williams has been handed a chance to impress at 15 against the Chiefs.

Jonathan Joseph's omission from the 23 to face the Chiefs in Hamilton also raises the prospect of the England centre taking a seat on the bench against the All Blacks for the Test series opener.

Rory Best will captain the Lions on Tuesday, with the six late tour call-ups featuring on the bench to ease the burden on Gatland's probable Test match squad.

"I was always confident about Owen Farrell being fit," said Gatland, of the England fly-half's quadriceps strain. "I was never not confident."

Asked if Joseph's omission from the Chiefs squad could indicate he has a chance for the first Test, Gatland replied: "Well he's played pretty well for us.

"Leigh Halfpenny obviously took a knock on the weekend, so he's going through the Head Injury Assessment (HIA) protocols.

"Apart from that it's bumps and bruises, we took George Kruis off relatively early because his calf was a bit tight.

"But aside from that nothing that's a concern for too long. We're in pretty good shape at the moment.

"There's an opportunity for Liam Williams to go and impress at full-back.

"All the back-three out there on Tuesday, they're all pretty versatile.

"We're giving players a chance here from an attacking perspective."