Ireland coach Joe Schmidt said jet lag and humidity has made preparations for the opening Test against Japan challenging after making six changes to the team that defeated USA last weekend.

Five of the changes are at the back where centre winger Andrew Conway, Rory Scannell and scrum-half Luke McGrath will make their first starts for Ireland. Paddy Jackson comes into the side at out-half with Simon Zebo starting at full-back (kick-off 6am, live blog on rte.ie).

There is one change up front where Dan Leavy takes over at openside from Josh van der Flier, who is not included in the 23.

There would be two more debutants on Saturday with Ulster’s Kieran Treadwell and Leinster’s Rory O’Loughlin are in line to may their bow, a week after Rory Scannell, James Ryan, Andrew Porter, Dave Heffernan and Jacob Stockdale.

Debuts for Treadwell and O’Loughlin would leave Ulster-bound scrum-half John Cooney as the only uncapped player in the squad for the second and final test against Japan next week.

Prop Finlay Bealham and hooker James Tracy could see their first action on this tour from the bench.

Schmidt said that players have had to make a big effort to be ready to hit the ground running.

"Trying to acclimatise has been very difficult. We did have the advantage of playing in very hot temperatures in New Jersey last weekend but by the time we left the hotel on Sunday morning and by the time we arrived here it was Monday night.

"You are very jumbled from the different time zones and so that has taken a toll but it certainly won’t be considered than anything other than an imposition in the early part of the week and by the end of the week we have to make sure we are ready to go.

"Preparations have been brief, pretty brief. The workrate in training today was really good because I think the players are very conscious that it is the only training we will get this week, so they wanted to make sure that they got as much clarity and got a bit of rhythm as best they could.

"It wasn’t perfect, and it seldom is, but I think we will get a few learnings from it and hopefully we will be a little more cohesive by the time we kick off on Saturday," he said.

The squad depart this (THURS) afternoon by bullet train 200 kilometres southeast to Hamamatsu for Saturday’s clash at World Cup venue, the Ecopa Stadium.

The Brave Blossoms will be without Harumichi Tatekawa, Akihito Yamada, Yu Chinen and 98-cap veteran Hitoshi Ono, who all withdrew from the squad due to injury.

Centre William Tupou will win his first cap in midfield alongside Timothy Lafaele in midfield while fly-half Yu Tamura will link up with Sunwolves star Fumiaki Tanaka at half-back. 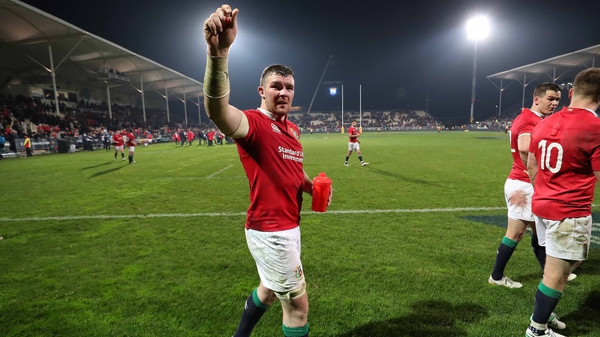 'Honoured' O'Mahony to captain Lions against Maori All Blacks